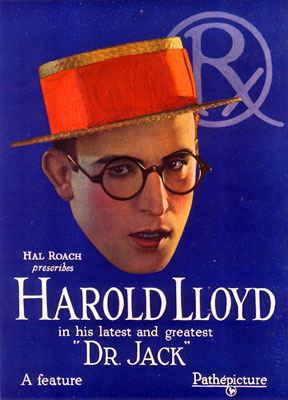 Dr. Jack, along with Keaton’s The Haunted House, was our Halloween offering at the Silent Clowns series. I dressed for the occasion, donning my saddle shoes and straw boater. (BTW, best place to get your own saddle shoes is muffys.com — they make saddle shoes for all the Broadway shows and tours, and they’re reasonably priced and great quality). I’d never seen Dr. Jack and watched the new DVD a few days beforehand to prepare. I was struck by the film’s charm and how well it succeeded, even with Lloyd playing somewhat out-of-character; in the film Mildred is the one who is the weakling who goes through a change in reel 5, thanks to Harold’s character. While something of an anomaly for that reason, I think it’s one of the better features and deserves more exposure.

I watched the DVD with the sound on, as an experiment — I usually screen films on DVD with the audio muted — and was surprised to recognize several photoplay music cues in the score, some of which I’m proposing for the Schirmer’s book or which were contenders.

The show went well, as did the scores. I managed to come up with couple themes that worked and which I was able to recall when they were needed again. Two weeks earlier, when we ran The Goat, Keaton’s theme — which came out of me at a show Bruce and I did at the Princeton Arts Council some years ago and which had become part of the score for a while — had not wafted up to the surface during the show like a couple of the other themes had…until a couple days later. I used it for Buster in The Haunted House, and it (basically) fit.

I’m still thinking about Dr. Jack. There is much made of the use of showing reflections in mirrors, and it features a number of character actors who are not part of the usual Lloyd ensemble; Charles Steveson shows up, but for only a tiny part.