The Universe of Silent Film 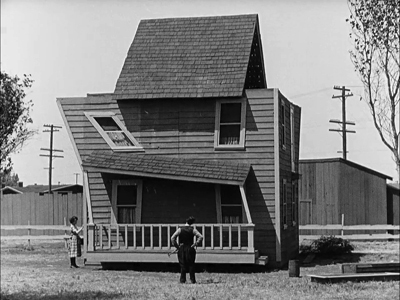 The unique combination of the delivering of reality and the elisions of it that we process in that quasi dream-state of experiencing Silent Film is what allows for an altered version of reality. There are several facets of what gets created in our minds through the leavings-out or disregard of elements of logic, consequence and even laws of physics and gravity.

Oddly enough, our guide for navigating all of these are the people we see onscreen. As long as they are buying into what’s going on, so will we. Story jumps, movements in time or space that are glossed-over and shouldn’t actually be possible, the existence of diegetic sound (there! I got one use of “diegetic” in!) or lack of it, and the weight of people and large objects — they are accepted by our onscreen playmates and consequently also by us.

This latitude with reality was used to even greater advantage by makers of serials and westerns, and taken to the nth degree by comedians. It’s no wonder the surrealists were fans of the slapstick one- and two-reelers.

The storybook-like fact-in-fantasy plus fantasy-in-fact that Walter Kerr outlines in The Silent Clowns allowed people making motion pictures in the silent era the ability to play in an altered universe that danced between documentary actuality and “anything goes”.

My following posts will cover some of the ways Silent Film bends reality in its unique universe.

2 thoughts on “The Universe of Silent Film”