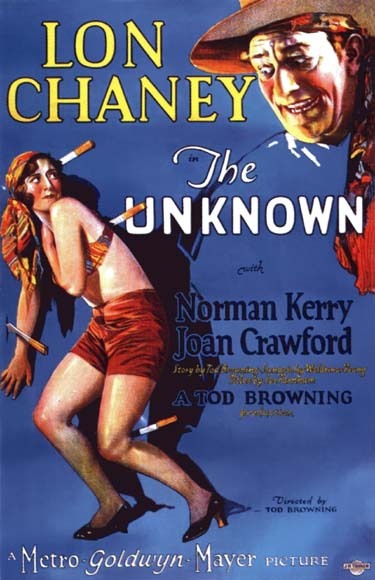 Played a matinee of L’Inconnu – or The Unknown – at MoMA today. The print came from GEH and has French titles which looked like they were made in the ’40s(?), white helvetica-ish against black. There is a print with the original release titles around (available from Turner/WB); I played to it at the Cinema Arts Center in October ’07, and have played to it at MoMA a couple times over the years as well. My announcing to the audience that the print was in French gave me an opportunity to share with the audience the anecdote of how the 35mm print turned up some years ago in a French archive in a room full of unidentified films – the film had wound up in there because someone had read “inconnu” (or “unknown”) on the cans and put them there.
Film played really well to the pretty full house we had, which was a mix of elderly regulars and museum guests. Used the Miditzer, since we were in Bartos (where there is no piano), and tried a lot of Lee Erwin-ish things…single ranks, obligato lines single notes, helds chords…real underplayed stuff to help support the great performance by Chaney and to undercut unintentional laughs over the Todd Browning stuff that today plays a little campy or stuff from an early Jon Waters film. Got a few nice comments afterward about the Miditzer and how great and it sounded. Now that we turn on the PA’s subwoofers in there the 16′ ranks sound fantastic. 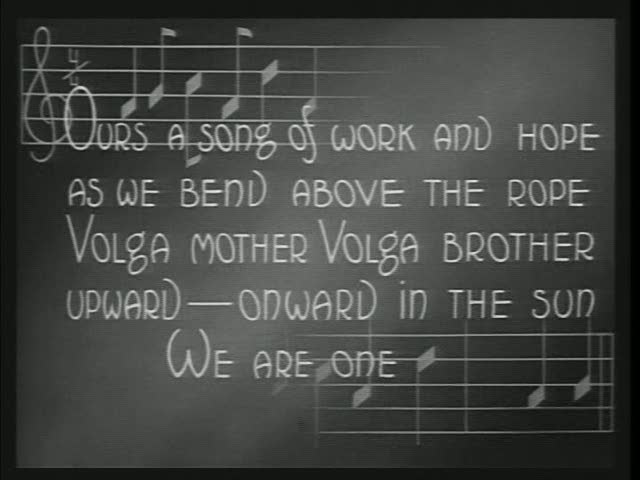 Next up tomorrow at 1:30 is the Cecil B. DeMille Russian revolution schmaltz-fest The Volga Boatman. I will have to play the “Song of the Volga Boatman”, even though it’s one of those Warner Bros. cartoon-sounding references, because if I don’t some nut will ask why I didn’t. Lee Erwin used to say he’d play the infamous Bach Toccata and Fugue before a show of “Phantom”, as the lights were going down, to get it out of the way. The audience expects it but using it will just come off corny. The scenes in Boatman where the boatmen are pulling a boat up the river and singing don’t fit the “Song of the Volga Boatman”, which a slow and heavy piece, and what the men seem to be singing is more of an energetic work song. The lyrics, shown onscreen at one point, (see scren grab at left) aren’t from the song anyway.