Okay, okay, I know the image at right is for the 1930 talkie remake of the 1923 silent, but you get the idea. I played for a double-header at MoMA last night (Sat 9/20): John Barrymore in Dr. Jekyll & Mr. Hyde (gorgeous new 35mm print from Eastman House) and George Arliss in The Green Goddess (1923, a new restoration from UCLA Film & TV). It was great to see a really nice print of J&H; it was shown at 21fps which looked a bit too slow, but just a hair. Maybe 22fps would’ve been OK.
Green Goddess was also run at 21fps, and was too slow. You could lip-read all the actors and everything felt a tad sluggish or off…too close to real-time speed. This should be run at 24fps. The film also had one of those accompanist nightmare sequences where you have to play a piece of recognizable music, and see it’s coming and are just praying “I hope I know the piece!” Arliss has his guests for dinner (well, he’s sort of holding them hostage, really). Arliss opens the Victrola, cranks it up, takes out a record, wipes the dust off it – come one, just get to it and show me the label! – puts the record on the turntable and puts the needle on – this is usually where we get a close-up of the record, but no dice – then sits down at the table. We watch Arliss and company listening to the music – and I’m just playing and guessing that it’s some kind of pleasant little waltz or fox-trot. This is driving me crazy…Alice Joyce asks Arliss “What is that piece of music?” Arliss takes his time and finally admits that “It’s ‘The Funeral March of a Marionette'” and makes a comment about how eerie the piece is. So I quickly swing into what everybody knows as the theme from “Alfred Hitchcock Presents” (that TV show used Funeral March of a Marionette for its theme). There was no way around this one, because of the long delay of the devulsion to the onscreen characters and the audience what the piece was. Oh well. This happen sometimes. 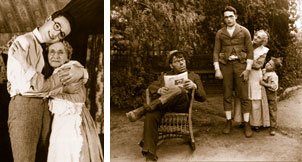 Today was opening day at the Silent Clowns Film Series, and we had a real nice crowd for Harold Lloyd in Grandma’s Boy. Man, does that film slay an audience. Ran my nice 16mm print, plus an Oswald Cartoon and a Chase one-reeler The Fraidy Cat which is basically GB with Charley Chase. Had a lot of kids (there was a birthday party for one of our under-twelve regulars) and the show went really well. Our next show is on Columbus weekend, a Chase program.

Thankfully I have the night off tomorrow. But after that I’ve got performances every day for the ensuing week or so. *Whew!*