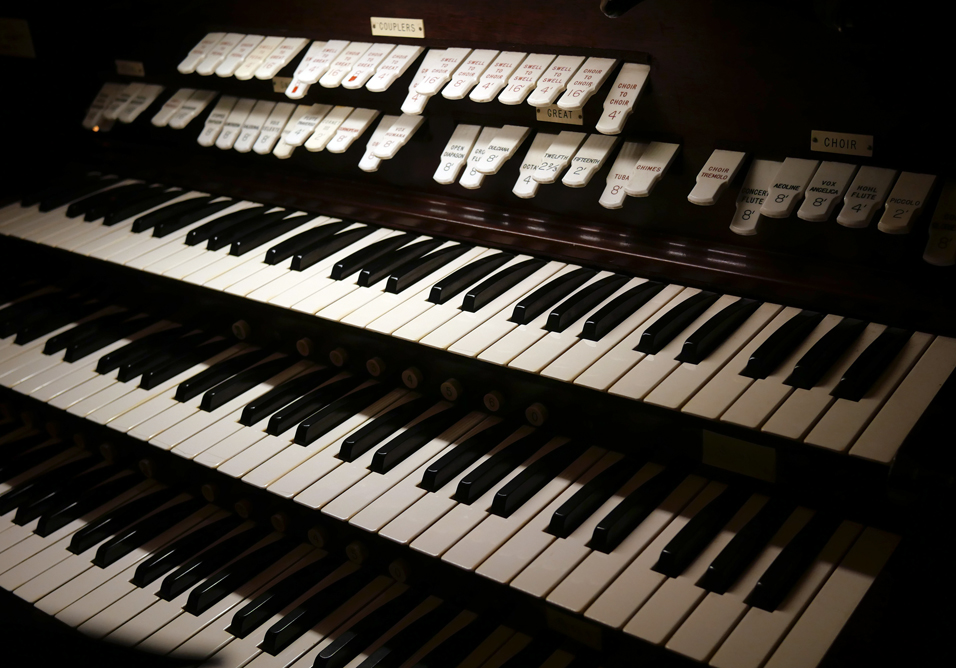 This is one of a series of posts I’m doing on organs that I’ve had the honor to be able to accompany silent films on. In August 2021, as things were starting to re-open, one of the shows I was booked to play was at Epsilon Spires, a new performing arts venue in Brattleboro VT.

I accompanied Fritz Lang’s Metropolis (1927) on August 28, 2021, and Buster Keaton’s Steamboat Bill, Jr. on November 5, 2021. You can hear some of my live score for Metropolis recorded at Epsilon Spires on episode 42 of The Silent Film Music Podcast with Ben Model.

I will be back at Epsilon Spires on Saturday, May 14 at 8pm to live-score Buster Keaton’s The General (1927). Tickets and info for the show are here.

The space is actually the town’s First Baptist Church, located at 190 Main St in Brattleboro, and originally built in 1868. The church became Epsilon Spires in 2016, when it was purchased, and had important repairs done on the building’s structure. The venue’s website states it is a “Home of Cosmic Frisson – Epsilon Spires is a center of communication, illuminating the relationships between creative arts, natural sciences and sustainability using multimedia platforms.” More details about Epsilon Spires can be found here.

The Estey Pipe Organ that resides in Epsilon Spires in Brattleboro Vemont was originally built in 1906 as Opus 300. It was “electrified” in 1958 by Elroy E. Hewitt, The instrument has 29 ranks, 4 divisions, 3 manuals. Below is a list of the organ’s ranks (meaning kinds of pipes or instrument sounds):

The online Pipe Organ Database has detailed pages for the original 1906 installation instrument and for the organ’s 1958 “electrification”.

These two views show the front view of the organ’s pipes, as well as the console. The console is positioned about a foot below the stage level, and its view is mostly obscured by a short curtain. The only way to see the instrument and whoever is playing it is if you are seated in the 3rd-floor tier or “balcony” (I know that’s the wrong term, but you get what I’m referring to).

Here’s a sample improvisation I recorded in April 2022. Recording was made with my Zoom H2n Handy Recorder, using its “mid-side” setting, and placed at the edge of the stage, in the center.