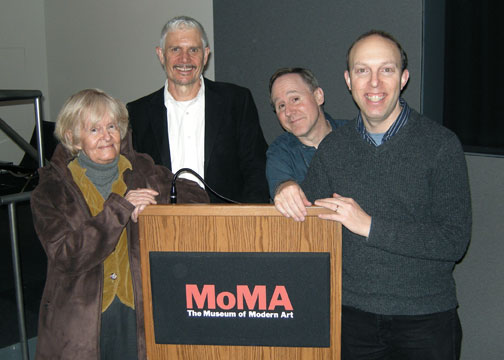 Last night was our third class session for Cruel and Unusual Comedy at MoMA. The class is going really well, and we’ve got 20 people in the class. A little more than half the people are silent or classic film fans who were attracted to the class by the title list and rarities, and the other half are people new to the genre. Everyone’s enjoying the class and the films. Our progam last night featured guest speaker Eileen Bowser, MoMA’s senior film curator emerita, and her talk was titled “Mack Sennett vs. Henry Ford”, and focused on automobiles in slapstick comedies and also covered the way both Ford and Sennett innovated and utilizied assembly-line production methods to make their product accessible to mass audiences. Last week was our “Excessive Violence” program with guest speaker Trav S.D. and, after the Thanksgiving break we have two more sessions – “Kids and Animals” and our program of ethinic/race humor.

I’m accompanying the films with a virtual piano…using the M-Audio controller MoMA bought for Miditzer use and connecting it to a laptop. I’m using Garageband for the piano sound, but am using a better piano sound than what comes with it. I found some samples sold a few years ago of Bosendorfer, Yamaha and Steinway samples made for use with GB. Theyr’e an improvement, but I’m still not crazy about them. Puchasing a real-deal virtual piano software that has multiple-velocity samples (like my Kurweil PC2 keyboard does) isn’t in my budget right now, and I’m hoping the samples I’m using made by PM Piano (2005, I think) sound okay.

One of my idiosyncracies using a digital piano, whether virtual or something physical like a Clavinova, is that the longer I play and hear it during a show the more aware I become of the fact that it’s not a real piano. It’s one of those little things that only I notice, and only during a show, when I’m really listening to myself and to the sound of the instrument. I’m sure it’s fine for everybody; it’s one of the quirks of being a creator of things…you only see the mistakes and problems and things you wish you could’ve done better, things which the audience never notices (even when you ask them about it).

Sunday begins two solid weeks of shows where my weekends will actually be during the calendar week, a total of 13 shows…most of which are at MoMA. My January is now pretty much booked up, although (luckily) there’s a week or so in the middle where I’m not performing. I have to be more diligent and conscientious about a lot of things…working full-time at this is something I’m still getting used to, and occasionally things I need to take care of fall through the cracks of my brain. Still, a nice problem to have.