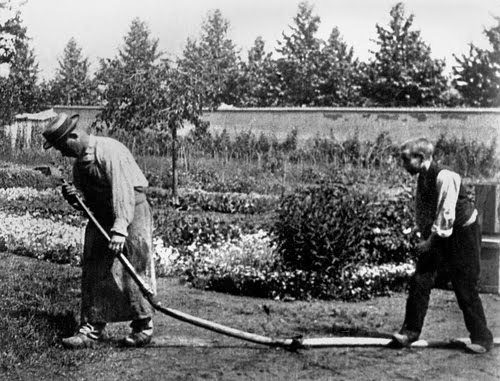 Back to “film school” today! Accompanied the “Actualities and Glimmerings of More” program at MoMA. Had a pretty big crowd, maybe 80-100 people.

I didn’t keep count while I was playing, but am guessing it was at least 40 films. Since they were early actualities with little or no plot, and since even the story ones were so short, I was creating full melodies for each rather than doing the usual underscoring thing. The last few films on the program were a few mins long – like the infamous Rescued By Rover – and had more opportunities for my usual format. I did find a more melodramatic approach fit these films, and spontaneously found myself playing The Crafty Spy by Gaston Borch for the gypsy’s scenes in Rover. Still it was a challenge creating that many complete melodies, and I was up for it. A nice change…and I get to do it all over again tomorrow.

Last week I noticed on the MoMA website’s listing for the first “Auteurist” program there was a link to film notes on that program written by Charles Silver. MoMA stopped doing printed film notes in 2003, and is not resuming doing printed notes. I suggested to Charles that he look into having the notes projected on-screen while the audiences are entering the theater. I really like Charles’ writing — the intro he wrote and gave at one of our Arbuckle shows in 2006 was absolutely brilliant — and it seemed a shame that people coming to the shows wouldn’t get to see these new notes…unless they had an iPhone or web-enabled phone and it suddenly occured to them while waiting for the show to start that they should poke around the MoMA website to see if there were film notes. I arrived at the Bartos theater this afternoon before the audience came in and saw this:

All of Charles’ notes are available online at this page. Go there and bookmark the page, as Charles’ notes for each program will be added weekly, I believe.
0 0 votes
Article Rating
Subscribe
Login
0 Comments
Inline Feedbacks
View all comments