I knew it.  I just knew it. I’ve been looking for years for written evidence that silent film actors had to adjust the way they moved to compensate for the speed-up of silent film.

It has always appeared to have been the case to me when I’ve slowed down silent film segments to the speed they were shot at. (See examples here.) It’s the reason silent film, despite being shown 30-50% faster than taking speed, still reads just fine…and most people’s attempts at silent filmmaking today just look like they’re being shown too fast. (Yes, there are a handful people who are working with the speed properly; then there are also the people who think the speed-up is a mistake and do everything in real-time. But that’s another topic.)

In June 2013, I gave my lecture “Undercranking: the Magic Behind the Slapstick” at the Library of Congress’ annual unidentified silent film conference “Mostly Lost”.  Afterwards, while debriefing with fellow historians in the lobby, Richard Koszarski mentioned to me that Milton Sills had written a piece on motion picture acting for Encyclopedia Brittanica that discussed exactly what I was describing. 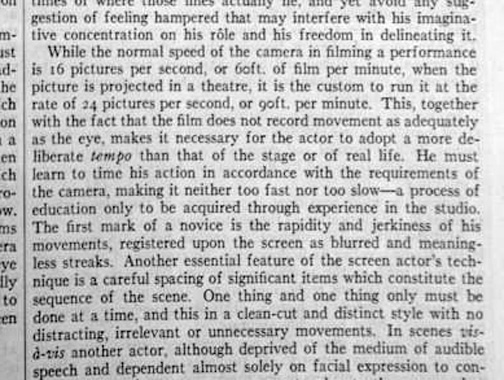 “While the normal speed of the camera in filming a performance is 16 pictures a second, or 60ft. of film per minute, when the picture is projected in a theatre, it is the custom to run it at the rate of 24 pictures per second, or 90ft. per minute. This, together with the fact that the film does not record movement as adequately as the eye, makes it necessary for the actor to adopt a more deliberate tempothan that of the stage or of real life. He must learn to time his action in accordance with the requirements of the camera, making it neither too fast nor too slow – a process of education only to be acquired through experience in the studio. The first mark of a novice is the rapidity and jerkiness of his movements, registered upon the screen as blurred and meaningless streaks. Another essential feature of the screen actor’s technique is a careful spacing of significant items which constitute the sequence of the scene. One thing and one thing only must be done at a time, and this in a clean-cut and distinct style with no distracting, irrelevant or unnecessary movements.”
— Milton Sills, writing on “Motion Picture Acting”
in the 1929 edition of the
Encyclopedia Britannica, pp 860-862.

Sills is inaccurate, however, in stating that 16fps is the “normal speed of the camera”, as a few different speeds were usually used throughout a film, and the standard cranking speed had crept up to 18 or 20 fps (or more) by the year this article was written.  Also, by the mid-to-late ’20s, there were theatres running pictures closer to 100ft per minute (26 or 27 fps).
These numbers aside, the point here is this: anyone performing before a camera during the silent era compensated for this speed-up by developing a modified physicality, speed, and timing.
If you are interested in silent film and especially in making silent films, read this…print it out…memorize it.
I am not crazy.  Silent film actors knew the film was being shown faster than the speed it was being shot at and created a new, modified form of movement and pantomime to compensate.
Thanks for reading.
Ben Model
0 0 votes
Article Rating
Subscribe
Login
4 Comments
Oldest
Newest Most Voted
Inline Feedbacks
View all comments

Yes — Chaplin became an expert at this kind of movement — Shamus Culhane talks about analyzing his movements in his first book — There's also a video on YouTube where someone has slowed down the chase scenes in THE GOAT to real time to show how Keaton got the effects he got — Mastering the art of undercranked movement is as important to understanding silent comedy as Squash and Stretch is in understanding animated movement.

Joe, those videos about THE GOAT were done by me and are on my YouTube channel “silentfilmspeed”

I have seen movies that if shown at a slower speed become great. and showed at a faster speed become ridiculous. Its the single most annoying thing about silent movies.
until videotape, to slow film down they had to stretch print which is reprint a frame every 5 frames. it produces a jerky motion. I wish I had control of speeds here. Very few silent movies are projected properly.

Thanks for this, Ben!