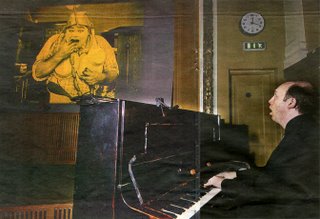 Photo at right was published in the Tromsø newspaper; we had a special screening of THE COOK for some kindergarten kids and press folk. So that’s I look like during a show…sheesh!

Saturday’s two shows (for me) were a Fy & By comedy from Denmark, Vester Vov-vov(1927). F&B were the L&H of Scandinavia and had a long-running string of hit films throughout the 1920’s; also known as Pat und Patachon. Their films were shown on TV during the ’50s and ’60s, and there is a 7 vol box set of their movies available from Germany’s Kinowelt label. The film was a gorgeous print with original tints (amber, blue) from the Danish Film Archive. It was explained during the intro that many of the F&B films had alliterative titles (like several of the Jerry Lewis films) that were plays on words.

In this case, the film took place on the northern shores which are called Vesterhov (or wester waves), and “vov vov” is the Danish equivalent of “bow-wow”. The balance of footage between the comedians and the main plot is just right. The supporting cast is made of top notch stars (the villain even resembles Vernon Dent!), and not the sort of 3rd or 4th tier contract players often tacked on to a comedy duo. The film played really well, and it was great to see.

The second program I played for was “Frosty Celluloid” which was about 3 hours (with an intermission) of travelogues and arctic Nanook-type actuality footage from Iceland, Finland and Norway. These were all films of an historic importance, in terms of preservation and being shown, but not nearly as entertaining as Fy & By. Each half of the program ended with a short, non-Scandinavian film. Part one ended with a beautiful color Edison Three American Beauties and part two ended with an unidentified trick film fragment which they referred to as Moondance (although that’s not its real title). We all agreed it looked like a French Pathé. Perhaps Monsieur Bromberg…?

Sunday was a day of familiar material, and lots of fun. A matinee of THE COOK, GET OUT AND GET UNDER, RECKLESS ROMEO and THE PAWNSHOP. Unfortunately the Chaplin short had no intertitles and didn’t play as well as it could have. The Lloyd short had tints and was titled “THE MASKED PRINCE” (because of the theater wrap-around story); I’m sure no one over there knows the song title anyway. There were several kids in the audience and, as expected, the Arbuckle shorts went over big time. That evening there were the Keaton features “S Jr.” and “The General” which went over very well; it was many people’s first exposure to BK, certainly in a theatrical setting. I helped introduce the films and answered some questions following.

Looking forward to next year’s “Stumfilmdager in Tromsø”…!