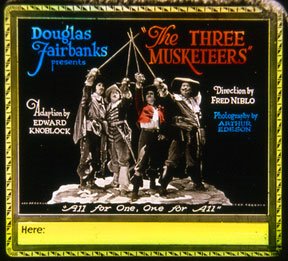 Yesterday’s showing of Douglas Fairbanks’ The Three Musketeers went quite well. Much better crowd than I’d expected, as usually dramas mean a dip in audience turnout at the Silent Clowns series. Getting the Miditzer to the N-YHS and back was as much of a snap as posisble, as I’ve really gotten the packing and unpacking of it down to a science. Steve Massa swung by the apt to help me get my three cases of stuff into a cab, and Rob Arkus came early to the show to help man the audio mixing board and set levels. Miditzer behaved itself just fine and sounded great in that auditorium. I’m not sure how excited I was about my playing (par for course, as you’ll note from previous posts), but I’m sure it was great for the audience. I made mental notes during and after the show, since I’ll be playing for this again in a few weeks at MoMA.

It was nice to hear a round of applause for Doug when he showed up on screen, and a couple audience members hissed at Cardinal Richelieu. I remember back in the ’80s when people did this routinely at silent film shows, but it doesn’t happen much anymore. Although last week at the MoMA class, when Sunshine Sammy turned up in Get Out and Get Under there was a nice round of applause from class members who knew who he was.

Also in the audience were Dave Stevenson, of Loose Than Loose Publishing, who provided his rare 16mm prints for our Educational Pictures show two weeks ago. Dave came down from Manchester, NH along with Jeff Rapsis, who is another film accompanist who started a few years ago. He’s in a good position to learn and play, teaming up with Dave (as I did with Bruce Lawton back in the 1990s) to make silent film shows happen, and he’s doing a show or two a month up in the Manchester area where there are a few nice venues for this. I’d connected him with Joe Yransky for a show at the now-defunct Donnell this past year, and then wound up being in Boise, ID when his show happened, so this was our first in-person meeting. See photo below. 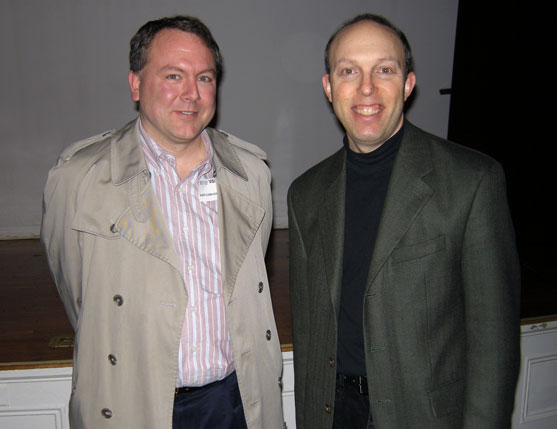 Tonight I’m off to the East Meadow Public Library on Long Island to play for The General (one of these days I’m going to get this score right), and then am back on L.I. tomorrow for Langdon’s The Strong Man at the Cinema Arts Centre. I am trying to come up with a good short to open for the Langdon. Walter Kerr told me he always ran a Keystone short or two before showing people Langdon, which I believe makes sense, and so I’ll come up with something frenetic and slapsticky either in 16mm or on DVD. Maybe an Arbuckle…