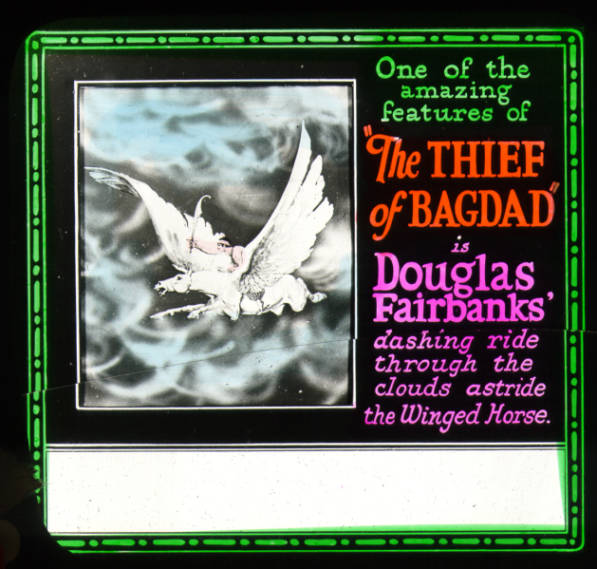 Today was a “marathon” — three shows in one day. Unlike running a marathon, though, I felt a little exhilarated instead of wiped out. Playing organ for two of the three shows was a factor, and so was playing for four Douglas Fairbanks pictures.

The day started at 12:30 with Robin Hood, which went over really well. It’s the one Fairbanks costume picture where you don’t see him make the transformation from who he is in the first reel to the hero he becomes in the rest of the film. Creating dramatic underscoring made me aware of this, I think, because all of his films have that “spinach” moment. The film has one my favorite silent Wallace Beery roles, too.

Had a minor technical snafu with the Miditzer, but it was one that had nothing to do with the program itself or the audio set-up. When I sat down at the organ and touched the laptop, I heard a little *snap* of static electricity (the MacBook Pro has a metal/chrome case) and as the house lights went down I noticed the Miditzer app had locked up. Our ace projectionist noticed something was wrong and brought the lights back up. I carried the piano bench over to the Steinway, figuring I’d just do the show on piano — ad libbing a few jokes and apologizing for the techinical problems — and the projectionist appeared in the theater to help me out, and encouraged me to just reboot since we weren’t going to back up the next show.

I rebooted the laptop and “filled”, giving a two-minute talk on the theatre organ and its use in silent film scoring. When the laptop was booted up I launched the Miditzer program, hit a few notes and all was fine, and the projectionist headed back to the booth. I thanked the audience for their patience and went to the Steinway to get the bench back, and after setting it in place at the Miditzer I looked at the piano and said “Till I need you again…!” (this is a reference to the end of The Mark of Zorro, which I explained to the audience), and we started the show. Whenever there’s a technical problem or a film break I always try to keep the show going. Lee (Erwin) always continued to play when something like this would happen during a show, and I do this as well. Keeps the momentum going and keeps people entertained instead of grumbling about the breakdown.

We tried something a little different with The Thief of Bagdad at the 3:15 show. After the show of Thief that I’d played the other day I was talking with the projectionist about how draggy the film can be, and we were talking about how (for some reason) the film had been marked to run at 20 fps. In chatting over how long that would have made the picture feel and how much better it looked at 24 fps (which is how we ran it), he half-jokingly said maybe we should run it at 25 fps. That thought stayed with me for the last couple of days, and today we tried it. We wound up running the first reel and the last reel at 24 and the rest of the film at 25 fps, and it worked great. I’ve never felt the film flow as well as it did today, and – and this is my litmus test on this sort of this – there was much more audience reaction and applause during the film than I’ve ever heard before. One of the many things I appreciate in the team of projectionists at MoMA is that they’ve all got a really good sense of running speeds for silents.

Despite the lousy weather we had good crowds for these shows and even for the 8:00 show of The Mystery of the Leaping Fish (a new 35mm restoration from MoMA) and American Aristocracy (Blackhawk 16mm). Anita Loos is long overdue for a retrospective, if you ask me.

Tomorow it’s Tourneur’s The Blue Bird at the Walter Reade Theater which, after 5 days of Fairbanks, will be a nice chance of pace.

That’s a workout! Good Lord! I think you’re absolutely right to play with the running speed, and agree that it drags otherwise. DF is a superhero, after all, so he can stand zipping around faster than mortal men. Your aside referencing Zorro is truly great wit. Wish I’d been there. Joyeux oiseau de bleu!D