Skip to content
After some initial futzing with audio set-up we got the Miditzer sounding just right for tonight’s showing of The Gaucho at MoMA’s Titus 2 theater. This happens from time to time, but the MoMA projectionists are fantastic and they always figure out how to make this work right. Steven Higgins (curator of the retrospective) told me the print we were showing tonight was lab new and had never been shown to an audience before. The print was made from an excellent preservation neg made decades ago, which had been made from nitrate materials in the Fairbanks collection. It looked amazing, as if it had been struck from the camera negative (and I’m sitting closer than the front row!). My Silent Clowns friends Robert Arkus and Bruce Lawton and his wife Alice Artzt were there, which was a nice treat. 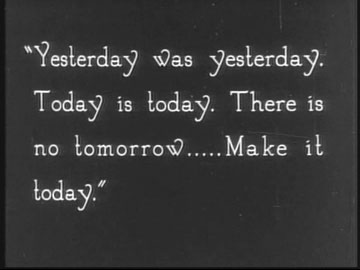 The score went pretty well, although I felt like I kept getting stuck in a couple of key signatures (there are only 12, though), and made nice use of the castanet sample on the Miditzer during the brief tango scene. A couple of themes came together during the show, and there were a couple I had worked out ahead of time – one for Doug and the girl from the shrine, and one for a love theme. The love theme was suggested by a line “El Gaucho” says a few times in the film: “Yesterday is yesterday, today is today. There is no tomorrow, until it’s today” (the screen grab at right is from the end of the film, when Lupe Velez says the line and so it’s a little different there). The rhythm of this line was easily fittable to a Spanish-tinged waltz love theme.
The Gaucho really is a great film, and I was glad to get a chance to see and accompany it. I am looking forward to tomorrow’s showing of MoMA’s recent restoration of The Mark of Zorro; the print has color tints that were done optically, but were based on instructions from the original. Am also looking forward to the new 35mm prints of the four pre-Zorro comedies I’m playing for (on piano) on Friday, Saturday and Monday.
Spent some time this afternoon (finally) getting some writing done on the silent film music book. It came surprisingly easily and I kinda lost track of time. I’ve loaded several CDs of Haydn string quartets into my computer…I’ve found over the years that listening to this music really helps me creatively. Go figure. (The opposite happens with Mozart. Don’t know why, but listening to Wolfy’s music drives me up a wall.) Also spent some time this afternoon making sure I’ve got enough black shirts and slacks lined up for the next few days…
Booking news: the conductor in Hot Springs, SD whose band did my Adventurer score wrote me about possibly repeating this in the summer; and – Dylan Skolnick has booked Don Q, Son of Zorro for our January silent at the CAC, and since they’re showing Verdoux in February we will do a program of Chaplin Mutuals for our silent show that month, the same titles Bruce and I will show on 12/30 at the Burns Film Center (with my nice Blackhawk 16mm prints).
Yesterday I revamped my website so it is now black text on white background. Still needs a bit 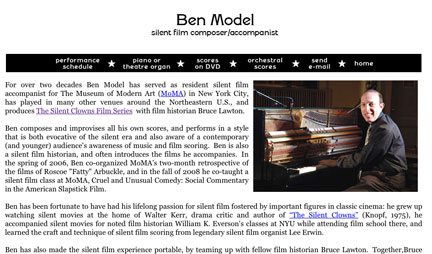 of a graphics overhaul, but white-on-black for a website is starting to be “old school”. Wanted to do this in time for the MoMA PopRally website (which has a link to my website) to list its next event: “Silent But Deadly” which will feature six one-reelers from our Cruel and Unusual Comedy course (I am accompanying on piano and Miditzer), plus “response videos” by comedians a media artsts. It’s a high-profile, very hip monthly event at MoMA and is usually tied to some exhibit at the museum. It’s kind of a big deal (at MoMA, according to Ron) that of everything going on at MoMA they picked our slapstick film class. 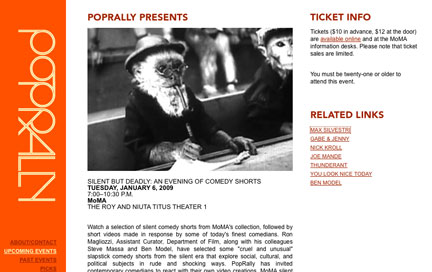 The PopRally should be a real blast. Will be interesting to see if the silents do better than the new stuff (quite possible they will). The show happens right in the middle of my Jan 4-12 Fairbanks run of shows, so I’ll be performing for 9 straight days.