The monthly arrival of the Blackhawk Films catalog was one of the most highly anticipated mail deliveries for me, growing up, as it was for many classic film fans in the 1970s and before that. Before home video, the only way to see more of your beloved silent and early sound films was to save up your paper route and lawn-mowing money and buy a copy of one of the films in 8mm or super 8mm from the Blockbuster/Netflix of classic film distribution, and watch it in your home on your own projector. Yes, they also sold films in 16mm, but that was for fans with deeper pockets or multiple paper routes, or grown-ups.

The other function these catalogs served in this way-pre-internet era was that they provided historical information, credit info, and synopses of the films. A lot of what can currently be gleaned in a few hours on IMDb and the Media History Digital Library would be accumulated over years of poring over the catalogs, memorizing stars, cast members and titles and assembling a filmography in your head from these bulletins and film books you’d find in your library – renewing them over and over again – or could find in a bookstore.

The catalogs stopped coming once I went off to college in the 80s, and at some point I unsentimentally jettisoned the ones I had accumulated on my shelf at home. I moved on from film collecting, only to resume in the late 1990s via eBay and in 16mm. Every once in a while I’d surf eBay for copies of my long-ago-tossed copies of the catalogs, but I never got around to bidding on one. All the time, I kept thinking: wouldn’t it be amazing in this 2010’s era of informational glut that the Blackhawk catalogs would be available online?

This has finally happened, thanks to a collaborative project undertaken by the USC Hugh M. Hefner Moving Image Archive (USA) and Lobster Films (France). In June 2018, Dino Everett and Serge Bromberg – the heads of these two archives, respectively – gave a presentation about the history of Blackhawk Films at the annual Mostly Lost film identification workshop at the Library of Congress. We attendees learned about the birth, rise, success, heyday and eventual decline and end of the company, as well as seeing photos of the facilities and equipment used to make the 8mm and 16mm prints.

The icing on the cake came at the end of the talk, when Dino and Serge announced that the Blackhawk Films catalogs had been scanned and posted online for everyone to read or download. As we exited the Packard Campus theatre for our mid-afternoon coffee break, there was Serge…gleefully handing out a flyer with information about the database and the URL to visit. They’re still missing a bunch of catalogs from the 1930s-1980s run, and fans who still have theirs are invited to reach out to the archives to have their copies scanned for the collection.

I have a very vivid memory of the first Blackhawk Films catalog I ever received. My family returned home from a winter trip somewhere and there it was, in the pile of mail that had accumulated. I recall sitting in my living room, transfixed by the sheer volume of information and film titles, poring over the pages one by one. I’ve just found it on the website, and I’ve posted the front page of it below. The online version is green, but I distinctly remember it being blue…perhaps the blue has faded to green in the surviving copy in the USC/Lobster collection over the ensuing four decades. I’ve tweaked the color hue with Photoshop for my own delight.

If you are looking for a rabbit hole to go down for a few hours, click here or on the image below to go to the website. 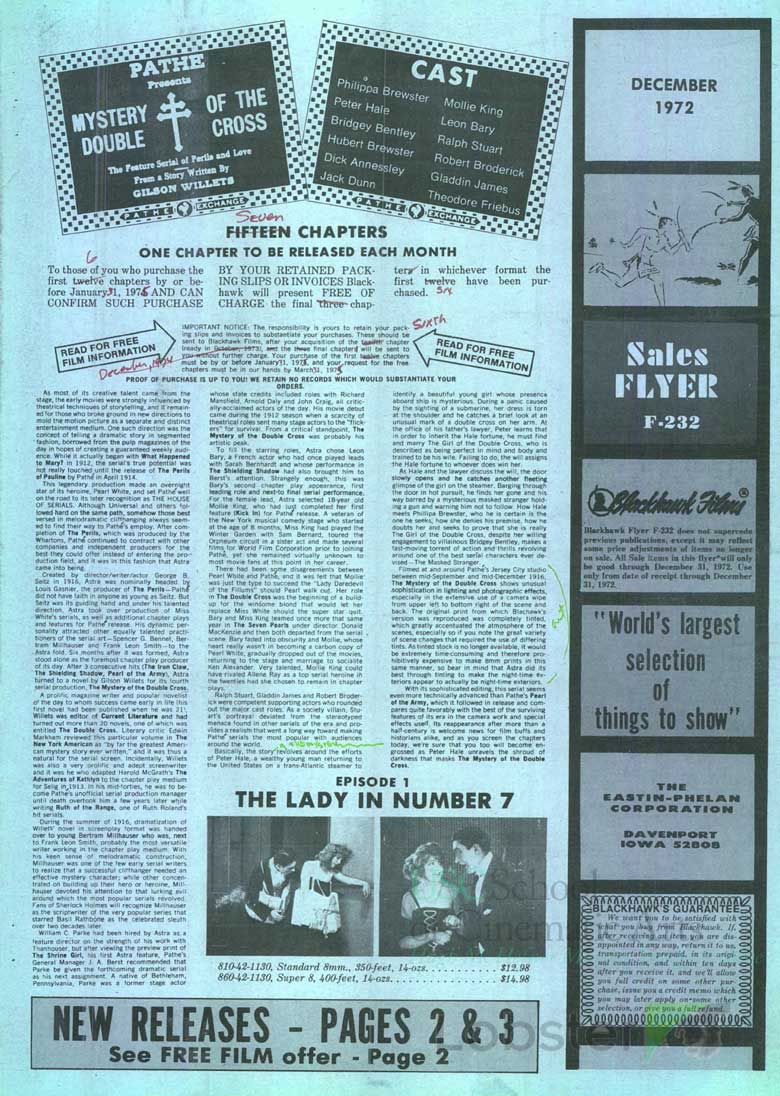 I was maybe 13? I recall that I purchased an excellent 15 minute Sampler of Blackhawk Films with scenes from “Intolerance” “Broken Blossoms” and “Easy Street”, among many others. I could only afford to buy one film full price, a silent version of a short comedy starring W.C. Fields.

But that catalog! The catalog was the richest source of film history, especially silent film history, that you could ever find, certainly before the internet. You could read and study it for hours and hours.

Yes! For a lot of us fans, those catalogs were the best way to read up on a lot of those films in the pre-internet age. I’m glad this post helped let you know the catalogs are online.

I loved Blackhawk films and their catalogs in the 1970s when I was a teenager. I was able to buy a few perhaps ten or so over the decade but it was so much fun and I also remember Niles film products from South Bend. And Ken films and Castle Films… Yes I agree the catalogs were a great learning source for one interested in Old Hollywood and film and living in rural North Carolina……