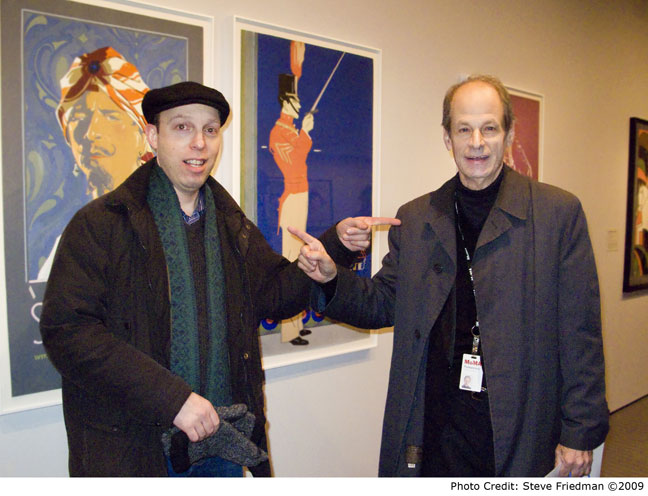 The Adventures of Prince Achmed concluded, and as the curtain in MoMA’s Titus 2 theatre closed and the lights came up, I took my bows by the piano and then headed back to the booth, as I’d done after all my shows. This time I found a post-it note on the table in the back of the booth where I’d parked my coat. It read:

This note had been left for me by fellow MoMA film accompanist Stuart Oderman. Over the ensuing years we continued to greet each other as Mr. Rimsky and Mr. Korsakov. The occasion of Stuart’s creation of this vaudeville-team nickname for us was the 6 month run of the series From Automatic Vaudeville to the Seventh Art: Cinema’s Silent Years, during which MoMA ran silent film exclusively in both its theaters. The series was part of the year-long observance of the dawn of the 21st century by exhibiting art museum-wide from the previous century, in three segments.

Aside from a brief meeting before he played for one of Bill Everson’s infamous New School screenings back in 1981, when I began playing for silents myself at NYU, I’d never interacted with Stuart prior to this MoMA series. I basically got to play at MoMA when Stuart was on vacation at Christmas time or during the summer. Stuart’s line about this was that “we travelled in parallel circles”. Stuart had a good line for just about everything. He always told people “When they make a movie of my life story, Ben will play me as a young man.” Then, for nearly half a year, Stuart and I saw each other a few times a week, crossing paths and kibitzing in the booth at MoMA’s Titus 1 and Titus 2 theaters.

Our playing styles were a bit different, but that didn’t matter to us. Stuart once told me one of our “regulars” asked him “Do you guys get along?”.  We mostly talked shop, comparing notes about the job itself – Stuart became my uncle in “the business”. I learned a lot of things about how to do the job we accompanists do in terms of things like being interviewed by press, talking with venues and programmers, etc. Stuart had an impressive work ethic. He was always in the booth by half-hour, with a paperback of one literary classic or another, and sometimes a sandwich, and nothing stopped him. There was a series tied to Bogdonavich’s book Who The Devil Made It one year, one that included a handful of Dwan-directed silents. I got to play for a couple of these shows (and met Mr. Bogdanovich, briefly) when Stuart was in the hospital for bypass surgery. However, two weeks later, Stuart was back at the Steinway in T1 playing for Robin Hood. Nothing stopped him.

In the years after the Automatic Vaudeville series we stayed in touch by phone – I would get voicemails that began “Hello Mr. Rimsky, this is Mr. Korsakov…” – and he would send me postcards from his travels. He’d let me know where he was, where he was playing, and would mention if the Laurel & Hardy silents series he’d scored for TV was being broadcast in the country he was in. I now make a habit of mailing postcards to younger silent film fans I’ve gotten to know.

After a few years of failing health, he and his wife relocated to the Actor’s Home in NJ. While he was not up for speaking with me by phone on the few occasions I would call, and spoke with Janet, I continued sending him postcards from the road, always addressing him as Mr. Korsakov, telling him what I was playing for and mentioning a DVD release I’d done a score for if there was one.

His music lives on in recorded scores for a number of silent films that Kino has released, on a Chaplin documentary The Eternal Tramp, and on 16mm prints issued by Bob Lee’s Essex Film Club (available on video from ReelclassicDVD). There are also the numerous books he wrote, including important works on Roscoe Arbuckle and long-time friend Lillian Gish, and the hundreds of students who had him for a high school English teacher.

I’ve collected several pertinent links to articles about and interviews with Stuart here, posted below. The photo above was taken by Steve Friedman when Stuart and I crossed paths during the Batiste Madalena series at MoMA in 2009 – I’d just played for something, and Stuart was on his way in to play for the next show (or it was the other way ’round).

I was a friend of Stuart's for many, many years.
I uploaded this interview with him from 2011 with a radio station in Ireland…