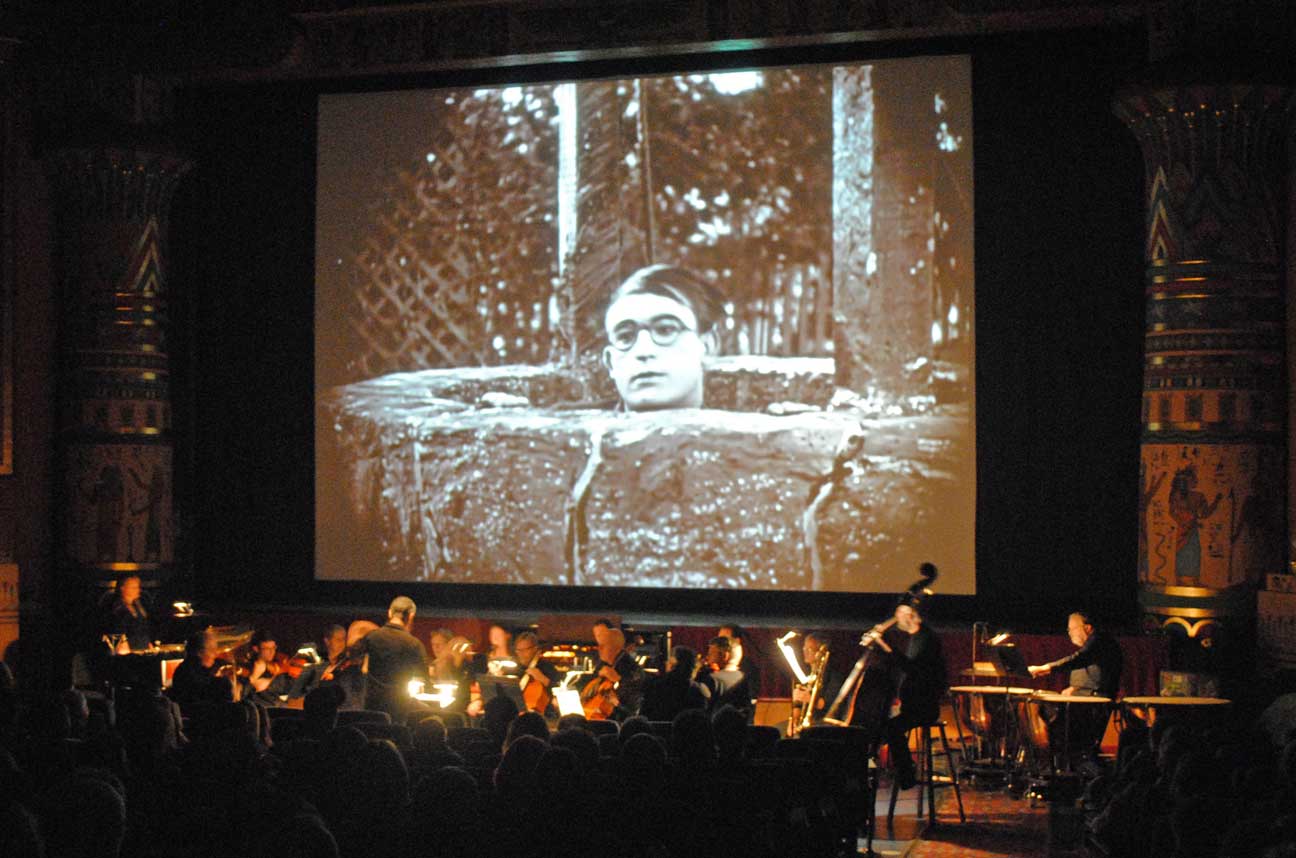 WRONG AGAIN (1929) starring Stan Laurel & Oliver Hardy — NEW SCORE, world premiere Feb 17, 2018 in Boise ID — Stan & Ollie are stable-hands who discover a horse they take care of has been stolen and set out to return “Blue Boy” to his owner for the reward. What was really stolen was the Gainsborough painting “Blue Boy”, but the boys don’t find out until it’s too late. Running time: 20 mins — orchestra score

DOG SHY (1926) starring Charley Chase — NEW SCORE! Premiered Feb 13, 2016 in a performance by the Boise Philharmonic’s Chamber Ensemble — Charley Chase (a silent movie version of John Cleese) is terrified of dogs, and falls for a young lady whose parents want her to marry a nobleman, and winds up posing as the family’s butler to get closer to her. Unfortunately, the nobleman turns up and Charley has to deal with both him and the family’s dog. Running time: 22 mins — orchestra score

THE ADVENTURER (1917) starring Charlie Chaplin – Chaplin plays an escaped convict who comes to the rescue of a pretty socialite (Edna Purviance), who takes him in after saving him from a near-drowning. At a fancy party at her family home, Charlie’s cover is blown by a guest who tells her father (a judge!) and calls the police. The cops arrive and give Charlie a hilarious and wild slapstick chase. Running time: 20 mins — orchestra and concert band score

ONE WEEK (1920) starring Buster Keaton — Buster Keaton gets married, and his wedding present is a build-it-yourself house. Buster and his bride build the house, unaware that his rival has switched the numbers on the boxes, resulting in one of the most surreal homes ever built. Running time: 20 mins — orchestra score

THE GOAT (1921) starring Buster Keaton — Buster is inadvertently photographed for a “Wanted” poster, and finds himself in all manners of pursuit while trying to win the hand of a woman whose dog he’s saved. Running time: 20 mins — orchestra score

COPS (1922) starring Buster Keaton — Keaton sets out to prove to his girlfriend that he can become a successful businessman, buying a wagon of furniture and accidentally driving it into a parade, which leads to one of the greatest chases in silent comedy. Running time: 20 mins — orchestra and concert band score

Ko-Ko the Clown in THE FADE-AWAY (1925) — NEW SCORE! Premiered Feb 20, 2016 in a performance by the Butte Symphony in Montana. — Ko-Ko the Clown was one of the top cartoon stars of the silent era, and the series was made by the Fleischer Studios, best known for Betty Boop and Popeye. In this cartoon, Ko-Ko and his dog Fitz tangle with live action Max Fleischer, who has a bottle of “fade-away” powder that makes things disappear. Max send them to “Fade-Away Land”, but they escape, only to take revenge on Max and anything else they can. Running time: 8 mins — orchestra score

Felix the Cat in PEDIGREEDY (1927) — Felix the Cat was the silent movie equivalent of Bugs Bunny or Spongebob Squarepants, and was a huge star during the silent era. More than 160 Felix cartoons were produced from 1919-1930. In “Pedigreedy”, Felix fakes a pedigree to get into the swanky “500 Club”, telling stories of encounters on Noah’s Ark, with an Egyptian pharaoh and with Columbus. Running time: 7 mins — orchestra score

GRANDMA’S BOY (1922) starring Harold Lloyd — Harold is a terribly timid young man who lives with his sweet old granny. Their rural town is terrorized by a bullying tramp, and Harold must face his fears and become the hero for the town and in the eyes of the girl he loves. He does this through a special charm his Grandmother gives him…or does he? Running time: 65 mins (feature-length) — orchestra score

Scores have been performed by: