“The Lighthouse and the Sidecar” is a nickname that is probably more catchy in its original language, Danish. Evoking two things that are pretty much extinct doesn’t help either. But this was how many people in Scandinavia and maybe Europe referred to Fy & By (pron. FEE eh BEE), who were sort the equivalent of Laurel & Hardy (who had their own set of international nicknames) to that part of the world. Except that the renown and films of the comedy team of Pat & Patachon never really made it across the Atlantic.

I had heard of the pair from some diehard hardcore fans at the annual “Slapsticon” comedy film festival in the ‘aughts of the current century. But my being assigned to accompany one of Fy & By’s silent features at the first “Silent Film Days” festival in Tromsø, Norway in 2006 was the first time I’d really gotten to see one of their films of the comedy team also known as Ole & Axel, who were comedians Carl Schenstrøm and Harold Madsen. They made comedy features from 1921 to 1940, and their films were on TV throughout Scandinavia and Europe. In Norway they were known as “Telegrafstolpen of Tilhengeren” or “The Telegraph Pole and the Sidecar”.

The film I got to accompany was Vester Vov Vov, whose title is an alliterative pun on “western waves” and “bow wow”, as the film takes place in an oceanside village where the boys arrive and set up a shack on the beach. Many of their film’s titles were like this, much like another comedian would name his films The Delicate Delinquent or The Disorderly Orderly.

What really impressed me about the film was the fact that they and the creative team behind the camera managed to balance the comedy of the boys with the romantic couple’s concurrent plot line of the film. Those always felt like they’d been shoehorned in, cast with D-list contract players and filmed by second unit crews. Maybe it’s because Fy & By’s comedy sequences aren’t slapstick-driven, maybe it’s because the pair don’t fit the usual “bossy guy and the idiot” formula.

The film’s cinematography, production design and performances are also A-list, and at times you may think you’re watching a film directed by Sjöstrom, Stiller or Dreyer. The print that survives is a gorgeous multi-tinted 35mm that I’m assuming is from a nitrate print.

Granted, I’ve only seen one of their silents, so it’s not a lot to go on. You may have your own ideas.

The film will be shown at MoMA during the Silent Comedy International series that runs Nov 23 thru Dec 2. Vester Vov Vov screens on the “Transatlantic Teamwork” program on Nov 29 and Dec 2, along with with shorts starring Bunny & Finch and Laurel & Hardy. Details and ticket info are here. 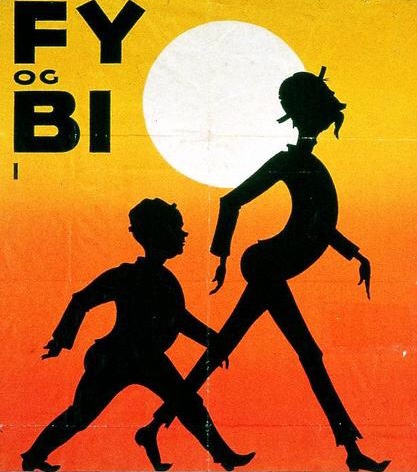 i love them so much, become obsessed with them since last year and i have all they films on a german dvd box (sadly it is the only thing you can get if you want they movies).