Last April, Charles Silver, Steve Massa and I screened MoMA’s holdings of Thanhouser Films to select the titles for this program. As it turned out some of these wound up being on the latest Thanhouser DVD set, which I also scored for Ned Thanhouser. With the exception of one title, a dupey 16mm print, they are all excellent 35mm prints, and we elected to omit Joseph in the Land of Egypt because of its length (four reels), in order to show more films. 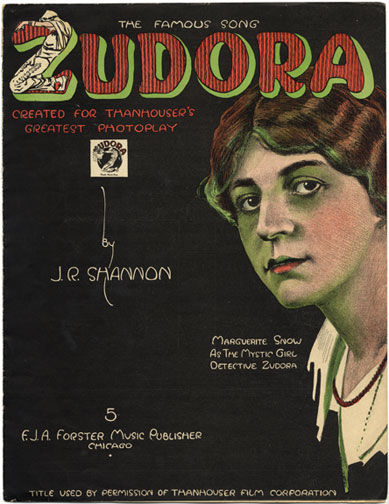 The evening was preceded by Ned’s being interviewed on the Leonard Lopate radio program on WNYC. I’ve been a guest myself a few times over the years, and connected Ned with the show’s producer, since I knew Ned would be in town for both the MoMA show and the one in New Rochelle. The segment is about minutes long, and has some great background info on the Thanhouser company; you’ll hear me playing the sheet music song “Zudora” during the show’s intro and outro, excerpted from the score I recorded for episode #2. I’ve embedded the segment below.

The show went very well, and we had a nice crowd. We ran the films a little faster than the speed they were transferred at for the DVD, which was a nice chance for me to see how they felt this way, and with an audience. I’d scored them looking at a (large) computer monitor. I wonder what it’d be like to record a score with the image projected instead. Since I record with the Miditzer at home, I could borrow a projector and show it on the wall in my living room perhaps…