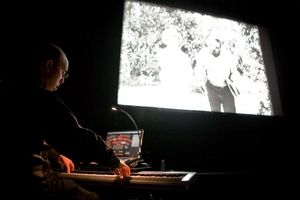 Tonight’s Keaton film is getting a warm reception from about 60 people sitting in a screening room at the Cinema Arts Centre.

But, it’s not Michael Keaton or even Diane Keaton scoring big laughs in “Seven Chances,” the classic screen comedy about a struggling young lawyer who must marry by 7 p.m. to inherit $7 million. Instead, it’s Buster Keaton, the silent comic nicknamed “The Great Stone Face.” The biggest laughs come during the famous scene where Keaton escapes both a mob of prospective brides and an avalanche of boulders — all without a word of dialogue.

“Seven Chances” was a hit in 1925, but Keaton‘s star plummeted with the advent of talkies a few years later. Nowadays, he’s the “biggest draw in silent pictures,” according to Ben Model, the silent film historian and film accompanist who hosts the series.

Silent movies themselves have been making a minor comeback with the comedy “The Artist” in theaters, and Martin Scorsese‘s “Hugo” paying homage to silent cinema innovator Georges Méliès. Once a month, the cinema rolls back the clock to the era when silents played on big theater screens to live musical accompaniment.

One of the regulars in the audience is Klaus Moser, 72, of Northport. Moser has been watching Keaton‘s silents since the 1970s. “In contrast to Chaplin, he doesn’t show any emotion in his face, but he shows it in his body,” Moser says.

One complaint is that many are available only in grainy, scratchy prints. The cinema screens “good quality prints” from major film archives such as the Library of Congress and The Museum of Modern Art in Manhattan, Sky says.

Once they have experienced a silent, they often change their minds. “When they do come out, they love them and they are wondering why they haven’t known that silent films are so exceptional,” Sky says. “Everybody laughing together has a different kind of feel than when you’re home watching on whatever size screen you have.”

THE SOUND OF SILENTS

“These films were never silent,” says Model, who also is the resident silent film accompanist for MoMA. He explains, “They always had music.”

Model composes and even improvises all his own scores on a virtual Wurlitzer organ — known as the Miditzer — while the movie is in progress. He also strives to provide audiences with the most up-to-date restored versions of classic films. For this showing, Model has created a “live restoration,” using a digitally restored four-minute Technicolor sequence in a newly released Blu-ray edition. The rest of the film is shown in a 35-mm print.

In tonight’s audience: the Bachar family of Centerport. Aiden, 9, Zachary, 11, and their parents, Mary Ann and Kevin, had enjoyed silent Charlie Chaplin movies. They’d also recently seen “Happy Feet 2.”
Keaton was new to Aiden and Zachary, whose dad is an Emmy-winning nature film producer-director-writer. But each gave an enthusiastic two thumbs-up to the silent comic.

Says Aiden: “I thought it was cool how he [Keaton] would jump and do acrobatic stunts.”

“It was funny,” Zachary agrees.