The gag title seen above from Keaton’s The Scarecrow (1920) got a huge belly-laugh at one of my shows this weekend. Usually it gets a tepid response (if any). The difference? At the top of our show, I told the audience what the joke was about.

I never tell an audience the punch-lines to jokes or gags in silent comedies when I introduce them, but I’ve gotten a lot of mileage out of researching and explaining some of the archaic set-ups. It’s important to give an audience a little pop cultural historical context before a film. Sometimes it’s a matter of merely reminding them the film takes place during prohibition. (Which explains another gag title in The Scarecrow: “My stomach is as empty as a saloon!”) Some of the topical references are worth looking up, though. I’ve found that looking these up and setting them up for the audience — again, without telling them what the joke is — helps the gag get the laugh it got (or close to it) 90-100 years ago. For instance…

Who the heck is Lydia Pinkham?

You know, in The Cameraman (1928) when Buster goes to the MGM newsreel building, looking for Marceline Day and shows the doorman the tintype of her and asks about her. The doorman says: 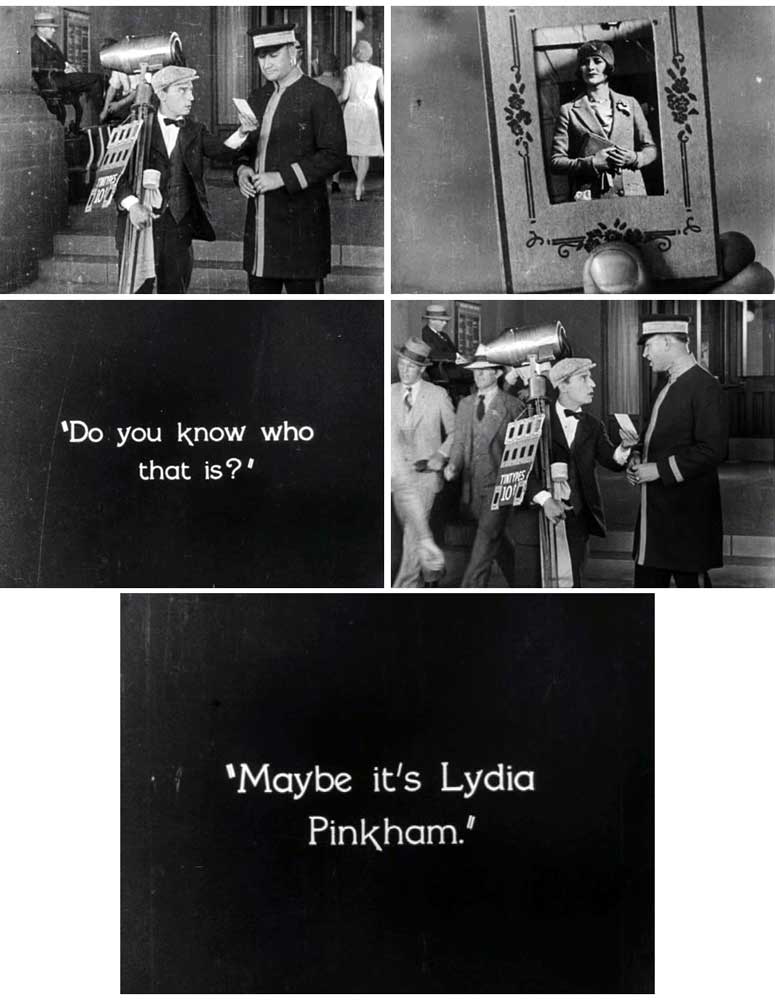 This usually gets a smattering of chuckles, just because of the incongruity of the answer. He could just have easily said, “Maybe it’s Greta Garbo”. But Keaton, or Ralph Spence or whoever wrote the titles for The Cameraman put that reference in because it was hilarious in 1928 and it would have been taken out or changed during previews if it wasn’t.

Why was a reference to Lydia Pinkham so darned funny?

If Wikipedia and a few other websites are to be trusted, Lydia Pinkham was known for an herbal tonic, touted as a cure for menstrual cramps and other ladies’ ailments. A popular patent medicine in the late 19th century, and Lydia E. Pinkham’s Vegetable Compound became doubly popular in the 1920s. Because it was 18% alcohol. Remember how I mentioned reminding the audience about prohibition? The alcohol content of Pinkham’s is about mid-way between beer and gin.

There was even a folk song written about Pinkham’s elixir, a drinking song, called “The Ballad of Lydia Pinkham” also known as “Lily The Pink”, that was around during WWI. It was even a small hit in the late’60s when it was recorded by The Scaffold (UK) and the Irish Rovers (US). There’s a similar gag in Safety Last referring to a woman buying “medicine” that sets up Earl Mohan’s character.

The last time I played for and introduced The Cameraman, I explained who Lydia Pinkham was, and mentioned her infamous tonic and its alcohol content, and reminded everyone prohibition had been in effect for 8 years when the picture was released. I said nothing more and didn’t even mention the scene the gag was in, and that they’d understand why I explained this when it came up during the film.

The joke got a huge laugh.

I’ve had the same success with the opening gag in Harold Lloyd’s Grandma’s Boy. That pull-back shot usually gets a lukewarm response, because all the set-up you have is that we don’t know what Harold is cranking. When you tell the audience ahead of time how popular Ford automobiles became in the late ‘teens and early ‘20s, and about the difficulties of cranking a Ford to start it, that opening gag gets the big laugh it should.

I feel like I owe it to the comedians who worked so hard on these films, and if they put something in there, you know it was because it got a laugh. Lloyd previewed the dickens out of Grandma’s Boy, and you know if that gag with the ice-cream maker didn’t get a laugh they’d have re-shot and put something else in there.

Back to the Keaton short I referenced at the top of the post. But, I’ll leave that one to you to figure out. The hints I will give you is that The Scarecrow was made and released late in 1920, and that the joke involves two major events in the country that year (besides prohibition).

Some links with more info: