There’s nothing you can do about the laughs that the film Nosferatu gets with an audience. Or is there?

Regardless of the translation from German, the intertitles like “Your wife has a lovely throat” get a laugh from an audience. We already know the Dracula story, and it’s the ridiculousness of a statement like this or “Your precious blood!” when Hutter cuts his finger (Gah! Spoiler alert!) that strikes a contemporary audience as funny.  I have found over the years that there are ways to squelch  inadvertent laughter by applying the right kind of underscore to the moment. No such luck on moments like these, or the one where Hutter notices the two dots on his neck and cheerfully shrugs it off, though.  Although, a few years ago, I got one such moment to work.

And, like a lot of my scores, I forgot what it was shortly after that show.

It’s probably one of the weirdest images in the film, late in the story.  Count Orlock’s boat slowly glides to shore and we see him in all his gangly-gaited weirdness carrying his own coffin through the streets to his new home.  We see it in two or three different shots, crosscut with shots of Hutter reuniting with his beloved, making it even more comical when you realize it’s not just one shot, but we are going to watch the count carry his coffin to his new crib a few times. 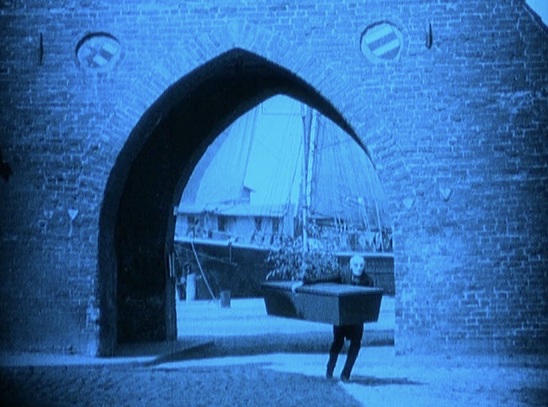 Last Friday, While waiting for showtime at a screening of the film I was playing at, I was trying to remember what I had done the last time I accompanied Nosferatu to make this scene work. I remember mentioning my small victory to a fellow accompanist, who asked me what I had done and I could not tell him.

During Friday night’s show, though, it happened again, and (as far as I could tell) the moment didn’t get a big laugh, or much of one at all. In the moment, caught up in the dramatic action of what that scene is really about, I created the right type of underscore.

The obvious choices for many would be some sort of creeping-around music, either a mysterioso cue or something even more obvious like In The Hall of the Mountain King, which would actually lean in to the silliness of the moment. I’m sure there were a number of musicians who patted themselves on the back for the laugh they got using Tip-Toe Through the Tulips or While Strolling Through the Park One Day in the scene. None of these actually fit what’s actually happening in the story, and the latter two song-title puns just call attention to the accompanist.

What I wound up doing, seizing on an impulse in the moment, from having been caught up in the emotional arc of the plot from the beginning of the film, was emphasizing the maniacal glee Orlock must have been feeling in nearing the pinnacle of his target by playing something much more energetic and demonic. It does play against the slowness and stealth of what the audience is seeing, but the moment is the near-culmination of Orlock’s long boat trip and his moving into the home that Knock, his accomplice, set up for him in reel 1.

It’s hard to describe with the written word, and I will be able to go into more descriptive detail about handling this in my next podcast episode. Unfortunately, I do not have a recording of my score from last Friday; I did actually remember to record it, but deleted the track right after the show ended. More about that, also, on the next episode. I will record today’s matinee of a different suspenseful silent film, and will probably keep that recording, for the podcast.