I was on the fence about attending MoMA’s re-premiere of Rosita last week, initially. (This was on May 25, 2018) I’d heard it was being presented with its original cue-sheet score, and Pickford herself had perpetuated the legend that the film wasn’t good. Well, it turns out that the cue sheet score was one of the better ones I’ve heard, and the film was certainly worth Mary’s having preserved it (which she didn’t, except for one reel). It may not be not Stella Maris or Little Lord Fauntleroy or Sparrows or My Best Girl, but it’s a good film, and a good film for what it was: Mary Pickford starring in an early ’20s Lubitsch costume picture.

There are two key components to any lesser-known film’s getting a new reputation. One is an archive or home-video outfit doing the work to restore the film. The other is on us, the classic film fans, and that is showing up. Because one of the key things that will tell an archive or a classic film venue to do another show like the one they’ve done is ticket sales, or disc sales if it’s a DVD or Blu-ray release.

I’m really glad I talked myself into going to see Rosita. One of the things I’ve learned about Mary Pickford’s films is that the more I see of her whole body of work, the more impressed I am with her. The range of roles and performances and film genres she took on is amazing, and it’s hard to tell from just one of her pictures why she was such a big deal. The trick about programming Mary Pickford, I find, is that there isn’t necessarily one or two iconic quintessential films of hers that she’s known for. Even if you don’t know who Harold Lloyd is, if you stick a photo of him hanging off a clock in the paper or on your website to promote a show of Safety Last, people will know what that is, and the film itself really gives you a good idea of Lloyd’s persona.

Seeing Rosita and knowing where it fits into Mary’s filmography — as well as how it intersects with Lubitch’s —shows you how she was not only trying new things but how whole-heartedly she’d throw herself into them. I feel the same way about Dorothy Vernon of Hadden Hall, which in some ways is basically a Doug Fairbanks costume picture with an emphasis on the female lead. It’s when you step back and look at all the features Mary Pickford made that you can really be wowed by her talents.

MoMA’s restoration looks fantastic, especially considering what they had to work with, a print preserved in the 1970s during Eileen Bowser’s tenure as archive director for the museum, from a nitrate 35mm in a Russian film archive. As you’ll see from Dave Kehr’s promotional video (below), the 2010s digital technology currently available brought a lot out of their preservation material, and the typeface and look of the newly-made intertitles are spot-on authentic.

If Rosita screens at a festival or art house near you. Go see it.

The cue sheet score, reconstructed and restored by Gillian Anderson, is much more sensitive and less repetitive or reliant on song-title puns than most usually are. Getting to hear it performed by a chamber ensemble of (I’m guessing) at least a dozen musicians was a real treat. I said hello to Ms. Anderson after the screening and asked about it, and she said it may have been influenced by the score Louis F. Gottschalk had composed for the film, and possibly also that Lubitsch may have had some suggestions. It’s not your usual James C. Bradford compilation. It did have a few spots that all vintage compilation scores have where the mood of the scene has moved on and the cue is still playing the previous mood. Hearing this in a few places made me reflect on why this would have worked for a 1920s audience but doesn’t quite hold up as well today.

Here’s one of those cues, Allegro Precipitoso by Domenico Savino, which occurs during a swordfight…and which continues to play for another half minute or so once the fight is over. This is a recording by Arthur Kleiner, MoMA’s first film pianist, from his 1967 LP Musical Moods For the Silent Films.

You can download PDFs of this cue from SFSMA (the Silent Film Sound and Music Archive) here.

Another cue I recognized was Frolics and Fancies by Clifford Adams. You can download PDFs of it from SFSMA here. 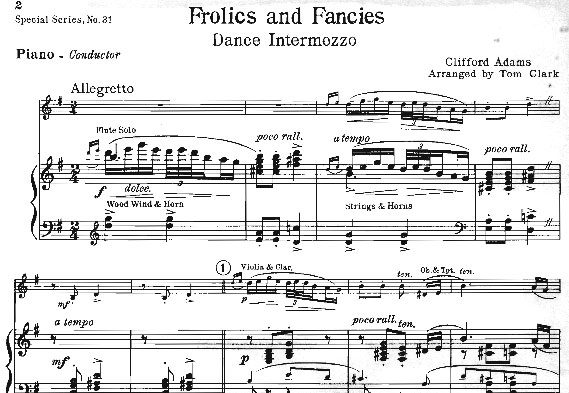 I knew the piece because I included it in a sheet music book I edited for years ago, called The Music of the Silent Films (MusicSales, 2015). The book contains 50 different vintage music cues covering all the moods you’d need to compile a score as well as representing the main composers of this genre of music.

Here’s to more restorations of rare, under-seen silent films and to their screenings and releases on home-video.

Here’s the video about Rosita and its restoration by Dave Kehr of MoMA’s Department of Film.