Marion Davies’ 1922 Film Beauty’s Worth Gets a Deluxe Outdoor Screening In the Birthplace of Its Director Robert G. Vignola

At the end of this week, on a piazza in the ankle of the boot that is Italy, a crew will assemble a large movie screen, high-end video projector, performance stage, sound system, music stands and chairs. The outdoor event, organized by the Cineteca di Friuli, will present an obscure Marion Davies silent film accompanied by an ensemble in the birth city of its director, Robert G. Vignola, whose birthday is today (August 5, 2018). The process of this film’s being selected for this auspicious screening in the small city of Trivigno began in a city in Maine USA…with an enterprising Marion Davies fan.

Earlier this year I received an email from Livio Jacob, director of the Cineteca di Friuli and also president of the annual Giornate del Cinema Muto in Pordenone, inquiring if I might release Beauty’s Worth (1922) starring Marion Davies on Blu-ray. I had released the film on home video in July 2017 in a trifecta of 1922 Davies silents, two of which were on DVD and the third on a DVD/Blu combo. Mr. Jacob explained that he had acquired the DVD of the film and suggested that since it was such a beautiful picture it would be deserving of a higher-def release. If releasing a film on Blu-ray cost the same as it did for DVD, I probably would have done so. Unfortunately, a Blu-ray release nearly doubles the cost of production on my end.

(This is something I am asked from time to time and is the subject of a blog post I’ve been meaning to write. I’ll get around to it at some point…)

While I was writing back to explain why Beauty’s Worth is available on DVD but not on Blu-ray, something about this e-conversation resonated with me, something I’d proposed to myself when I began making rare silent films available to fans: you just never know who’s going to see this and become a fan of it. My first taste of this came four or five years ago when I posted a formerly lost silent film made by the Elgin watch company on my YouTube channel, a film that wasn’t of much interest to me but which was deluged with thousands of views by pocket-watch aficionados. When I heard from Mr. Jacob again a month or two ago about the project to have the Marion Davies film screened in Trivigno as part of a Vignola birthday celebration, this hit me again. It also speaks to the importance of fans and independent producers of DVDs helping to make obscure (silent) films available.

Edward Lorusso (the Maine resident I mentioned above) has run ten successful Kickstarter campaigns to fund the accessing and scoring rare and obscure silent films which he has made into DVDs for the fans/collectors who crowd-fund the projects. Beauty’s Worth was number six, done shortly after number five, The Bride’s Play (1922) with Marion Davies. Ed had figured out, as I had, that the cost of acquiring a new scan of a film from the Library of Congress and the cost of hiring someone to record a new score could be covered by crowd-funding from fans.

Fellow film restorationist and DVD/Blu producer Eric Grayson and I were interviewed last March for the San Francisco Silent Film Festival’s blog about our indie restoration/distribution work. One of the points we both made in the piece was that, yes…we appreciate the attention and plaudits we’re getting for our work, but there really needs to be more people like us (and Ed, and others) doing this. People ask “why don’t you put _____ out on DVD?” and most of the time the answer is that we’d love to but it would necessitate our being twelve more people. The thing is that it is possible to do, with crowd-funding, home-brew production techniques, consumer/prosumer equipment and software, and by working with the many people who know how to edit, record, graphic-design, etc. The more that people take up this enterprising notion, the more great and overlooked classic films can be rediscovered.

There are a couple more bookings for Beauty’s Worth that have been lined up for later this year, and Ed has licensed the film for broadcast and streaming on TCM next year. And on Saturday, August 11 at 9:00, right when dusk is winding down, Marion Davies — aided by Forrest Stanley, June Elvidge, Hallam Cooley and others, as well as by director Robert Vignola and featuring a new score by Stephen Horne and Zerorchestra — will entertain a few hundred people of Trivigno in what will be the first time this picture has been shown to an audience since the 1920s.

If you want to see what Livio Jacob thought was so wonderful, do what he did: order Beauty’s Worth on Amazon here. (Released by Undercrank Productions and theatre organ scored by yours truly.) 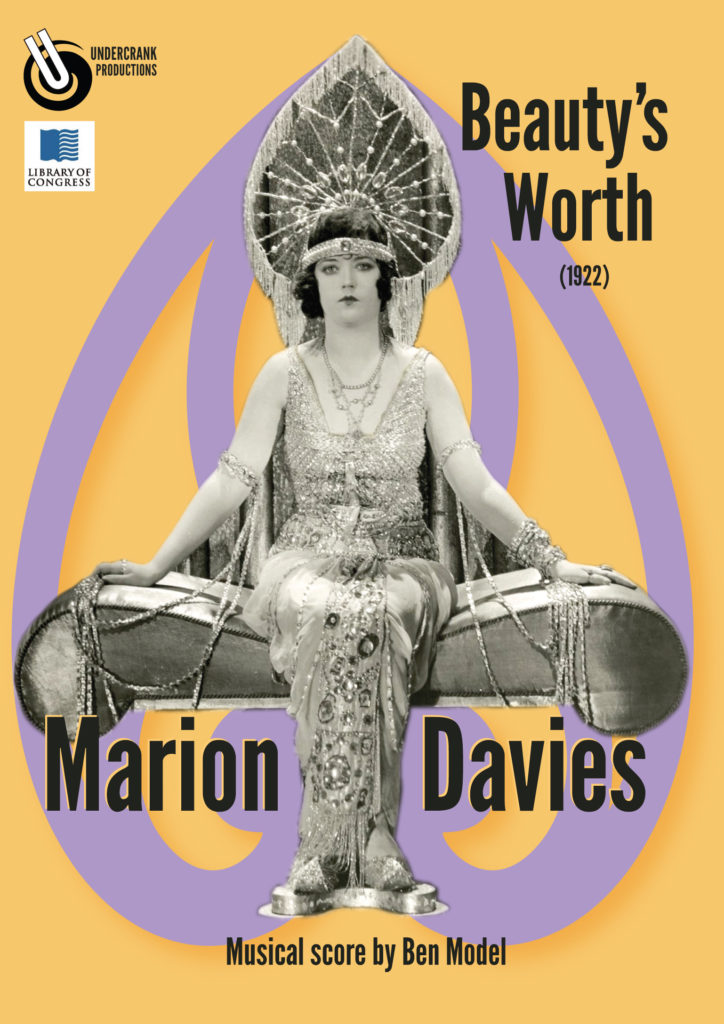 I’ve written a post on some Marion Davies homevideo news on my “Silent Room” blog.

Thanks for the follow-up post on your blog, Ed!