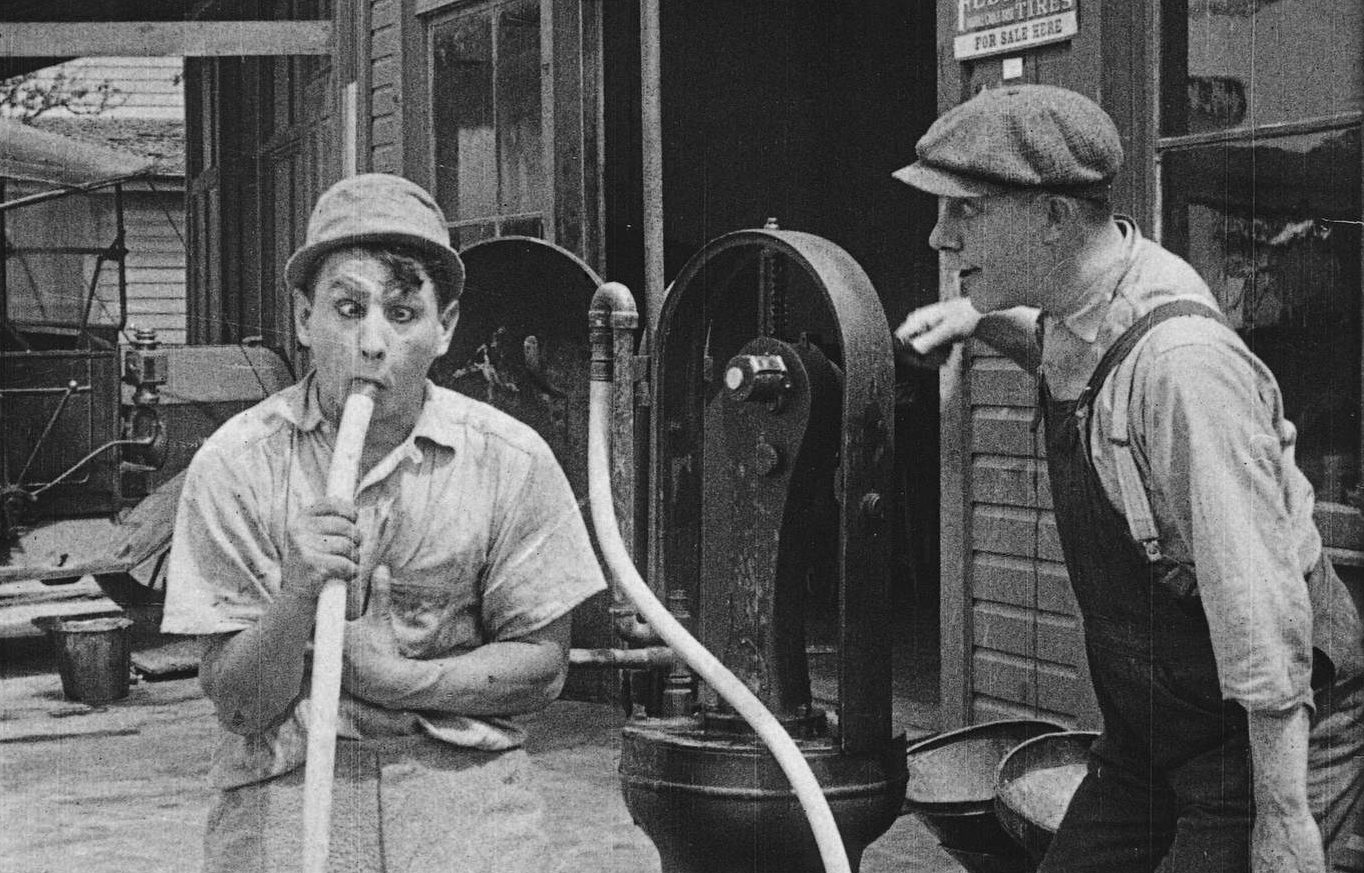 Stylistically, there are two things about the American films of Marcel Perez that make them stand apart from the work of all the other slapstick comedians of the silent era. One of them I can’t yet put my finger on. The other, oddly enough, is linked to the current popularity of unrelenting comic book superhero movies in theaters.

Flying back from somewhere recently (okay, it was Norway), I eaves-watched the first 10-20 minutes of Kingsman: The Golden Circle on the seat-back screen of the chap in the row in front of me. It occurred to me that the kind of physical and visual stunts and “gags”, if you will, that I was seeing were the kinds of things one could easily get away with in a silent film, in slapstick comedies or in 1920s serials. They were the kinds of things Keaton referred to as “impossible gags” that he had to give up when moving into features — although the structure of the film-within-a-film dream sequence in Sherlock Jr.  gave him one more full license to pull these off.

The un-believable action sequences that set off the first two reels or so (if there were still actual reels) of Kingsman are acceptable to an audience today because we know we are in the universe of superheroes or comic books or graphic novels come-to-life, a specific universe. This parallels the universes of video gaming and of silent film. The expectation of reality is skewed, and — especially with silent film — we’ll buy anything we see on screen as long as the people in the film let us know that they do, too.

In editing, preparing and scoring the eight films on the new Marcel Perez Collection: Volume 2 DVD something occurred to me about Perez’s screen persona. While his slapstick film counterparts — from Chaplin all the way down to Jimmy Aubrey and Al Joy — were underdogs, often at the wrong end of the stick, Perez’s screen persona was also something of a super-hero. There are Popeye-type gags involving feats of superhuman strength throughout all the films Perez made at various studios, along with the flirtatious man-about-town stuff, and it starts with the earliest surviving film he made in the US, for Eagle (in Jacksonville, FL) called Some Hero (1916).

In this film, Perez survives being squashed by a safe, chews through thick ropes he’s been tied up with by bad guys, punches a cyclist so hard he flips over and over into the background like a top, drinks gallons of gas, and inhales a basement full of water…all in the name of helping a pretty young woman who’s been kidnapped. I won’t spoil the ending, another feat of super-human strength.

And that’s just in Some Hero.

In other films he climbs up the side of a building only to jump off it, land on the street, get up then get run over by a speeding automobile and then walk away as if nothing has happened. This is in You’re Next, which is on the first Marcel Perez Collection DVD. In Sweet Daddy, also on vol 1, he is wrapped in bandages like a mummy and executes the entire climactic chase of the film this way, hopping energetically up and down stairs, over furniture, and through the streets of Yonkers. In Wild, a western on the vol 2 DVD, Perez catches bullets in his teeth and then executes a fight with two cowboys Jackie Chan would be proud of.

While Perez kept changing his onscreen character name and costuming throughout his American starring shorts, this penchant for gags that are almost cartoonish feats of strength — hence my reference to Popeye, who would do these things even before the inevitable can of spinach made its appearance in the story — are part of all of his comedies.

Some Hero (1916) was sourced for the DVD from a 35mm preservation done by the Museum of Modern Art, and was rendered out at 20 fps for the DVD. I was able to create new opening titles for the film, which is missing its beginning minutes and closing shots, based on titles that survive in two other Eagle comedies that survive in vintage 16mm prints at the Library of Congress.

The other aspect of Perez’s films that make them stand apart from his contemporaries’ work is something I haven’t quite figured out, and once I do, I’ll post again about it. The new DVD will be released on February 27.