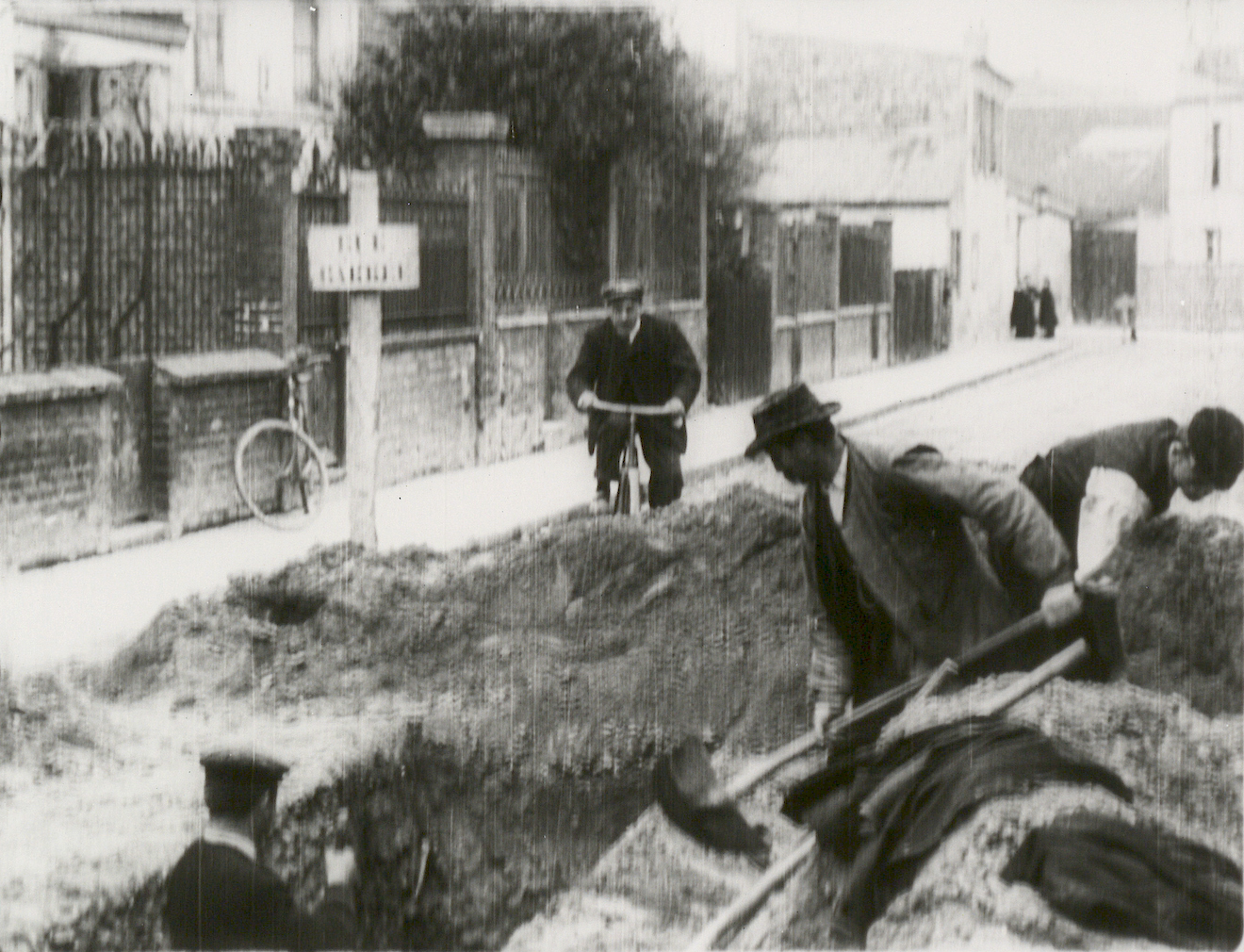 The injury humor of Johnny Knoxville, the Farrelly Brothers, and thousands of anonymous klutzes is nothing new — French and Italian comedians were doing it during movies’ first decade.

Last September, a lot of people sent me a link to an article in the New York Times that articulated something I’d been thinking for some time. Namely, that the smartphone has become the new editions of Edison’s Kinetoscope parlors. More than 120 years ago, people lined up around the block to peer into a chest-high wooden box to watch a 1-2 minute moving picture of scenic views, recreated news and — more importantly —accidents and acts of violence, both real and staged. Boxing matches were among the most popular attractions.

I’m sure many silent film fans who read the NY Times article had already had this thought. It certainly wasn’t news to me. Not just because of what I knew about silent cinema, but because of the third iteration of the Cruel and Unusual Comedy series I co-programmed with Steve Massa and MoMA’s Ron Magliozzi in March 2012. The 6 programs of 45 films, all sourced from the amazing Desmet Collection at EYE Filmmuseum (Netherlands), featured “Euro-clowns” of the 20th century’s first dozen years.

For two weeks, film fans from the NYC area were treated to comedians like Zigoto, Onesime, Cunegonde, Polycarpe, Sarah Duhamel, and someone known alternately as Tweedledum and Robinet — among others — plow locomotives through shops, flood homes, destroy property with a monkey, run around town madly shooting people with a rifle, get attacked by crazed rabbits and more. Some of the shows were introduced by Elif Rongen-Kaynacki from EYE, our co-conspirator in the 2012 C&U series.

True, none of these comedians took an anvil to the crotch – they were much more inventive, creative and agile to go for a stunt like that for a laugh.

One of the standouts from the series was Robinet’s White Suit (1911), also a favorite of people who bought the Marcel Perez Collection DVD that I produced and released in 2014. In this short, Marcel Perez has just purchased a white suit and, after carefully checking that the weather is clear, decides to debut the garment in a promenade around the streets of Paris. He is then doused, splattered, sullied, painted, collided into and eventually hurled down a coal chute. All along the way, Perez takes spectacular and acrobatic falls, tumbles that one associates with the likes of Al St. John and Buster Keaton.

But Steve and I had seen Perez outdo himself in an earlier film, one we made sure to include in the first Cruel and Unusual Comedy series we did with Ron at MoMA in 2009, a film that is in the museum’s collection called The Short-Sighted Cyclist.

It’s the film that put Perez on the map, so to speak. So popular, it was remade by Perez, both on a bicycle and in an automobile. It was a film he was known for here in the states, since the Gaumont and Eclipse and Ambrosio and Pathé shorts had long been imported for US distribution, and Perez remade it in the US in 1915 as one of his first films for Eagle.

I was thrilled to be able to coordinate access to The Short-Sighted Cyclist and two other titles from MoMA’s collection, thanks to the collaboration of the Library of Congress, for volume 2 of The Marcel Perez Collection DVD, which will be released in March 2018. What viewers and fans will see in the 1907 film Perez made in France for Eclipse, however, is much more than a litany of staged accidents, which is what most of the films of this genre are. Perez’s falls, stunts and flips over tables and into ditches are breathtaking, and they build as the film progresses. Even more remarkable is the fact that they are performed as the result of riding a bicycle headlong into a storefront, horse-drawn-trolley, crowds of people and more.

Some technical info about the edition you’ll see on the DVD: the film was rendered out at 18 fps, and each shot has been stabilized. During a print check for the 2012 Cruel and Unusual Comedy series, just for the heck of it, Steve and I looked at a couple of the films at a few different speeds…and agreed that they all landed best at 18, and the audience response at the shows bore this out. I almost made a new main title card for the film, but chose not to…

Just before finalizing the DVD box art and the explanatory titles that precede each film on the disc, I found a piece of information that resolved a puzzlement I’d had about the film’s title. “Short-Sighted” seemed an unusual term for “near-sighted” — in the film, Perez is a bike messenger who’s lost his spectacles…hence all the accidents.

A title search for info about the film on Media History Digital Library (“Lantern”) yielded, strangely, nothing. However, searching for “Eclipse” (the film’s distributor) and limiting search results for the years 1905-1910 turned up several hits…under the title The Near-Sighted Cyclist, including a synopsis that exactly matched the film.

Further research with MoMA revealed that their print had been acquired in 1980 from the National Film Archive (now BFI). The print’s main title card did not look quite like it was from a 1907 French film, and after Steve and I confirmed that “short-sighted” was more of a British expression, we assumed that the print was a British issue from the time. Rather than try and guess what a 1907 Eclipse main title looked like, I left the “short-sighted” one intact to preserve the integrity of the material.

The print cuts to black at the end, which is not unusual — often a “The End” card as well as the last several feet of a film are missing from these rare shorts. I was able to create what people would have seen at the end of the film. Nearly all the Desmet prints we showed in 2012 ended by cutting to the studio logo, the way early ‘teens Biograph or Thanhouser shorts do. I found an Eclipse logo in the trade magazine, tidied it up, and slapped it on the end of the film.

I hope fans enjoy getting to see The Near-Sighted Cyclist and to having it in their DVD collection. That way, the next time any contemporary comedian falls off a chair in a new movie and is hailed as a genius of physical comedy, you can show them this short to shut them up.