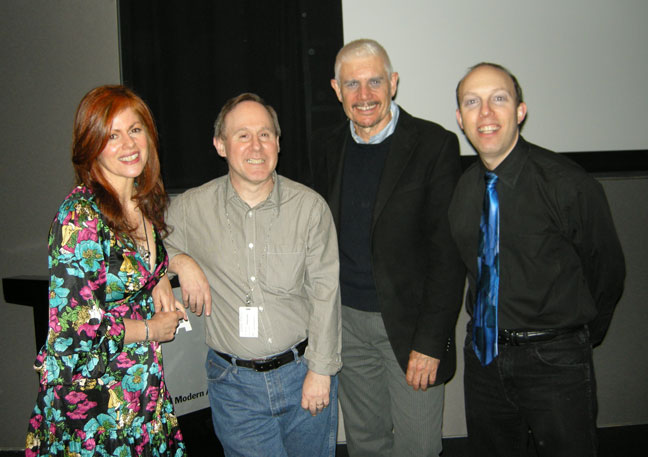 Arrived at MoMA at 11:15-ish, went to Titus 1 and got the Miditzer equipment and rolled it through the catacombs of the museum to the education building and to the Bartos Theater. Set up the Miditzer, and had a sound check with the projectionist. Lunch. 1:30 show of Beggar On Horseback, plus reel 2 of Shivering Spooks and all of Sundown Limited. I introduced the show, since half the audience probably didn’t know Spooks was only reel 2 and that Beggar On Horseback was incomplete. Played the show, “sight-reading” Beggar On Horseback…glad I’d added a piano rank to the Miditzer, since Edward Everett Horton plays a composer and there are scenes with him playing the piano and of someone using a player grand (Philip Carli will know exactly the make and model). After the show, two people tell me about a production of the show of Beggar On Horseback at Lincoln Center in 1973, one of whom tells me also about seeing a fragment of the the film of B.O.H. at BAM in the early ’70s that is around 10 mins long and which probably goes where there is a big jump in the action in the print we showed (gorgeous 35mm from L.O.C.). Where’d it come from? Packed up Miditzer, putting away pedals and part of the stand and then schlepping the keyboard/controller and main stand up to the Warner screening room where tonight’s Cruel and Unusual Comedy class will take place. I meet Ron Magliozzi in his office to do some research on Fairbanks film scores in MoMA’s collection. Ron tells me he caught the last 20 mins of the show, and noticed that one of the audience members filing out of the theater was Steven Sondheim. I go back home to get my sustain pedal (which I’d forgotten this morning). See wife, daughter, check email, eat, grab pedal and head back to MoMA. Meet Steve Massa at Ron’s office; then head down to Warner to set up the keyboard and laptop (using piano samples). Our class starts at 6:30 and goes well. Guest speaker is Sandra DeFeo, Co-Executive Director of the N.Y. Humane Society. Eileen Bowser also came to the class. Class went really well. Packed up the keyboard and stand and stowed it in a room on the film dept’s floor (I will return tomorrow for an appt at the Film Dept, and will then bring the keyboard and stand to Bartos Theater to set up Miditzer for Thursday’s 1:30 show of The Cossacks starring John Gilbert). Attend cocktail reception for all MoMA courses in the lower lobby of the education building, and find out Steve has identified yet another comedy short in the collection of the Nederlands Filmmuseum…the 2nd reel of a lost 1928 Charley Chase. Then, back home.

There is an episode of “The Odd Couple” where Felix and Oscar think their air conditioner is possessed and they go see a medium, played by Victor Buono. Buono says he used to be a dentist and then found his calling with the occult. Oscar asks him at one point if he really likes all this spiritualism and voodoo and stuff, and Buono shrugs and says: “Beats cleaning bubble gum out of braces.” Sometimes when I have a crazy day like this, I think of that line…