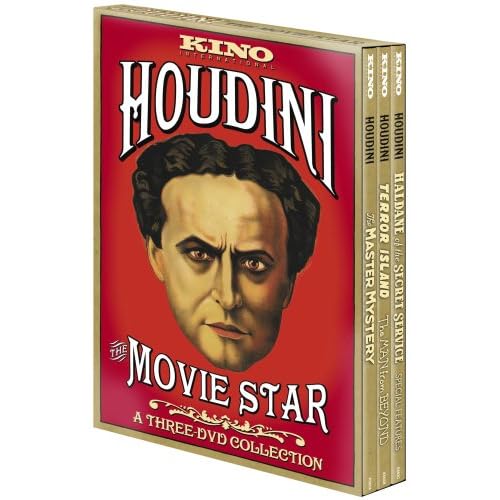 BTW, click on the image at the right to pre-order your copy of Kino’s new 3-disc DVD set Houdini: the Movie Star. Checked my copy and was glad to see everything was in synch. The menus are great, and that front cover artwork is real eye-catching.

Several of the films I’ll be accompanying in Huntington, NY at the Cinema Arts Centre for their monthly series called “Anything But Silent” have now been booked. Dylan Skolnick and I sat down and made up a list of what we’d like to show this year, rather than going month-to-month as we have in the past year. Here’s what’s lined up so far:
All the other months are TBA (and I’ll post these when they’re ready), although I suspect we’ll be doing Peter Pan again at holiday time; this has become an annual event out there.

Another silent film now “off the menu”:
One odd snag that has come up is that in order to show It with Clara Bow one must not only license the film through Kino, but Kevin Brownlow’s Photoplay Productions must be contacted for a license to have live accompaniment of any kind, regardless of who is playing and what the score is. This was to be our May program, but we will be picking something else. This is the first I’ve heard of someone having the rights to live accompaniment of a silent film, and it makes no sense to me. I can understand the Chaplin family’s insisting on orchestral performance of Chaplin’s own score as a proviso to allowing you to license a Chaplin film, but to charge extra just to be able to accompany a film is a new one on me. I don’t think this condition existed during the silent era, and am not sure how this is possible now. When I find out I will post it here.

Hey Ben. Thanks for posting. I try to attend all the CAC Silents and always have a great time. Looks like a really good program. I’ve never seen the Phantom Carriage, looking forward to it. If you’re looking for ideas to round out the final months I just read Tol’able David is being added to the National Film Archive along with Charlie Chase’s Mighty Like Moose (One of my all time favorites), they would be good choices…. Love the blog posts.

Tol’able David is one of the titles we’re considering for either this year or next (there are so many!). Moose is a funny short, but I think there are others even better, like Dog Shy and His Wooden Wedding (which we showed in October with The Unknown…don’t know if you saw that program). Depending on which theater we’re in I’ll keep bringing shorts by Chase and others; Cinema 3 can show 16mm.Hope to see you at Wings on Tuesday…this will be our first show with theatre organ accompaniment. We gave it a dry run at January’s Peter Pan and it… Read more »