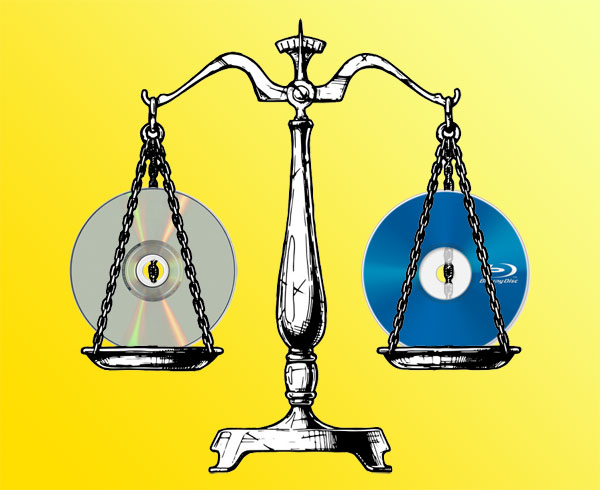 I’ve been producing and releasing DVDs via my Undercrank Productions label since 2013 and, in January, began releasing our titles on Blu-ray as well. All new releases in 2022 were issued on both formats. At a time when some other labels catering to classic and silent film are releasing only on Blu-ray, I was curious to see what sales numbers would be like. Remarkably, all four Undercrank releases for this year have had the same result.

Releasing on both formats requires two jobs of file rendering and of authoring, the steps to turn the final videos into a format – burned or pressed into a 120mm-diameter, 1.2mm-thick plastic disc – that your player will recognize and play back. It also means graphic designer Marlene Weisman has to take her design for the DVD cover and adapt it slightly to work for the dimensions of a Blu-ray cover.

It’s a few hours’ work for each of us, but the end result means that people who do not have a Blu-ray player will be able to purchase the disc we’ve released. There are people who have a DVD player and who have not upgraded to a Blu-ray player. Honest. It’s not the cost – Blu-ray players aren’t that expensive. There are classic film fans who are sticking with their DVD player, and there is an even smaller subset of those, who are loyal to their 4:3 tube television. I’ve written about my thoughts on why here.

The impetus behind all the Undercrank Productions releases is access, and so it was worth it for me to put in the extra elbow grease, and have Marlene do the same, to add Blu-ray for our new releases rather than switch over to it from DVD. All our releases are MOD (manufacture-on-demand) and perhaps that’s why it’s more feasible for Undercrank than it might be for a pressed-all-at-once process used by companies like Kino Lorber or Flicker Alley.

After seeing results for Undercrank’s releases of Zander the Great (1925), Beverly of Graustark (1926), Lon Chaney: Before the Thousand Faces – volume 2 and, most recently, helping to make available the D&D Productions’ Lupino Lane: Silent Comedian, I can say I’ve noticed a consistent result.

In the first two months of release (when a bulk of the sales occur) on all four of these titles, 85% of sales were Blu-ray, and 15% were DVD.

Even for a release like one from Undercrank Productions, where the first two months’ sales tally might be in the 500-800 unit range, that’s still 75-120 fans with DVD players getting to see something – in a quality production + package – they’d never seen or been able to own before.