I found myself playing piano for films and I’d hear other instruments in my head during the show. This was the very late 1990s. Had to be, because I started learning the organ a year or so before Lee Erwin passed in 2000, and remember going to his place to practice and get advice a few times. Trouble was, getting to an instrument, and especially acquiring one, was no mean feat.

An electronic organ was thousands of dollars, and took up space, which was a commodity for an Manhattan apartment dweller. It would have been like buying a very small sports car and parking it in my bedroom. So that was out.

What I managed to acquire in 2002 was the Kurzweil PC2, and a MIDI pedalboard made by Roland. The PC2 has excellent orchestral samples and the ability to separate the keyboard into 4 regions, and with MIDI I could assign a channel to the Roland pedals. It was a 20th century “unit orchestra”, which was what theatre organs were called in the 20s.

I did a number of shows with the set-up, and scored three projects for Kino with it as well. These were a lot of work, and I’m proud of the I scores I did with the PC2+PK5. I made a very specific choice to use the PC2 for Haldane of the Secret Service with Harry Houdini in in 2006 (rel. in 2008), and for Fritz Lang’s The Spiders in 2011 (rel. In 2012). They needed this sound.

The Houdini film had been transferred at 18 fps (“silent speed” or what I call “home movie speed”) and at that frame rate lacked the sense of tension and intrigue that the detective/spy thriller it was needed. There was no possibility of this speed being adjusted, and so I had to find the best way to make the film work, to have the energy, dynamism and entertainment it deserved. A piano was just not going to cut it. The orchestral samples allowed me to add a Herrmann-ic oomph to the proceedings as the unfurled at cranking speed, and I think the score works.

By the time I was hired for The Spiders, I had been using the Miditzer virtual theatre organ program for a few years at shows and for a few DVDs, but Kino requested the type of sound I’d done for Haldane. The PC2 was a good fit for this action spy thriller, and scoring this film was a fun challenge.

I made a point of trying to avoid using a lot of large ensemble samples, and layered different instruments by multi-tracking, using a really good (also affordable) program called Reaper. One of the tricks of working with orchestral samples on a keyboard is playing them so the notes don’t schmear together. You have to listen harder to what’s coming out of the instrument and forget you’re playing a keyboard. It’s a different animal from piano or, especially organ.

You can see from this screen grab that I had 5 tracks going: two for different orchestral ensemble samples, one for strings (pizz, tremolo, etc), one for brass (solo tpt, tbn or fr. Horn, or ensembles), and one for percussion. 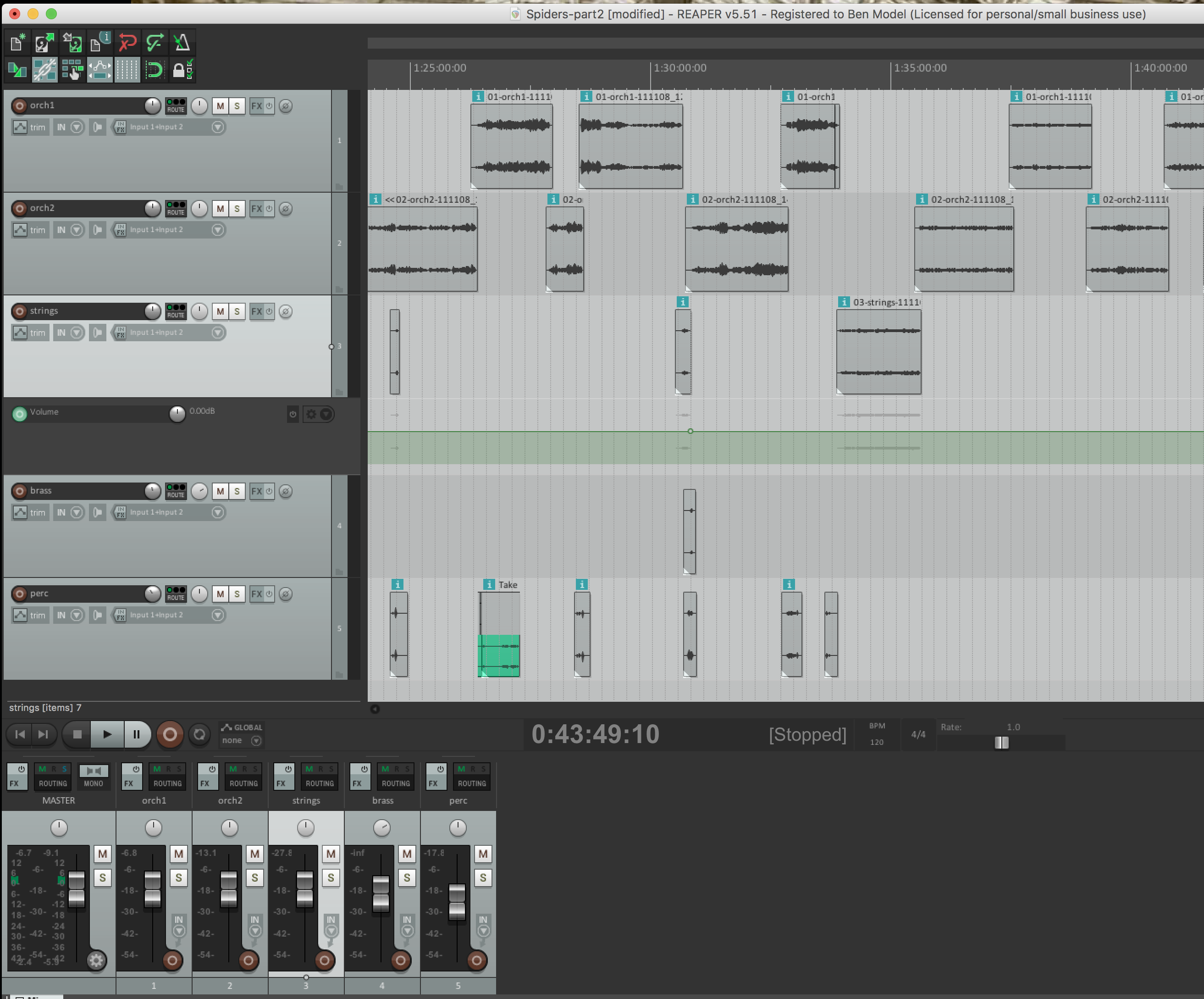 For both Haldane and Spiders I’d toyed with the idea of crediting the “ensemble” I’d worked with. I’d seen credits on few silents for an orchestra way outside the U.S. — the Moravian Philharmonic, perhaps — and knew that there were a few orchestras from obscure countries abroad composers could hire to record their orchestral music. For half a minute I’d considered having the music credit read “performed by the Klopstokian Philharmonic”, as an inside joke to folks familiar with the W.C. Fields film Million Dollar Legs, but ultimately I just went with a basic music credit for myself.

The DVD of The Spiders was released in 2012, and came out on Blu-Ray in 2016. I don’t know how it did in terms of sales, but you’d really need to be a hard-core Lang fan to seek out this title, I’d imagine. Fortunately, Kino has just released a 12-disc Blu-Ray box of the Lang silents, and The Spiders is in there, and maybe now Lang fans and silent aficionados with deep pockets will have a chance to discover the film. It’s actually quite good, and a lot of fun.

I no longer have the PC2 but may try using orchestral samples that can live on a laptop with one of the organ programs I use, so that when I turn on strings rank or trumpet rank what I’ll hear will be real strings or a real trumpet. Just like what the inventors of the theatre organ were going for back in the 1910s.

You can buy the Fritz Lang: The Silent Films Blu-Ray box direct from KinoLorber or on Amazon, and if you just want to pick up The Spiders it’s available, solo, on DVD and Blu. For an audio sample, you can hear a little of the score on this recent episode of my podcast.