Haven’t had a chance to post, because of all the work and gigs. Here’s a quick update.

Am in the midst of composing/recording a score for Haldane of the Secret Service (1923), starring Harry Houdini (also prod/dir). It’s a straight detective melodrama, and not a pair of ‘cuffs in the whole 6 reels. Am using a chamber orch sound (strings, with occasional solos by reed or horn) with my Kurz+pedals, so it’s taking longer than a solo piano score. This seemed the right choice to support the picture, as its drama is all in the titles, plus the film was transferred too slow (IMHO), looks like about 18 or 19 fps. Also, was just contacted by Kino for another project; more on that in a future posting.

Silent Clowns got off to a start on its 10th season last Sunday. A great show, the highlight of which for me was Steve Massa’s excellent live recreation of Winsor McKay’s Gertie the Dinosaur vaudeville act. We may get to perform it for a vaudeville night in NJ in Dec; stay tuned… 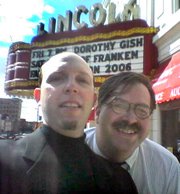 Here you see me and Phil Carli (that’s Dr. Philip C. Carli, to you) in front of the Lions Lincoln Theatre in Massillon, OH. We were the accompanists for the Fall Cinesation this year (9/27-10/1). Phil’s been playing for them for years, and this was my first year. A great fest, almost all films screened were brand new (some wet from the lab!) restorations by GEH and LOC.

Just before going, I had a double-header of university shows. Pratt College in the morning, playing (piano) for DeMille’s The Cheat in a nice tinted 16mm print. Course is taught by Elena Rossi Snook, head archivist at the Donnell Media Center; print also came from there. That save evening, I played (organ) for Cabinet of Dr. Caligari and Nosferatu on DVD at Vassar College for their cinema studies classes. Was supposed to do this show on Miditzer, but their new state-of-the-art theater couldn’t accomodate running audio from my laptop into their house sound system. Luckily, the NYTOS chapter of the American Theatre Organ Society had just purchased a 3-manual Allen, and the instrument resides in Poughkeepsie (where Vassar is). Also a board member of NYTOS works at Vassar, so *poof* we had a physical theatre organ for the show. Did not sound as authentic as the Miditzer, but we had the ornate-piece-of-furniture aspect going for us, and a dozen or so students came up and asked questions about the instrument after the show. Am still not impressed with video projection; blowing up a DVD image still looks like a 16mm dupe.