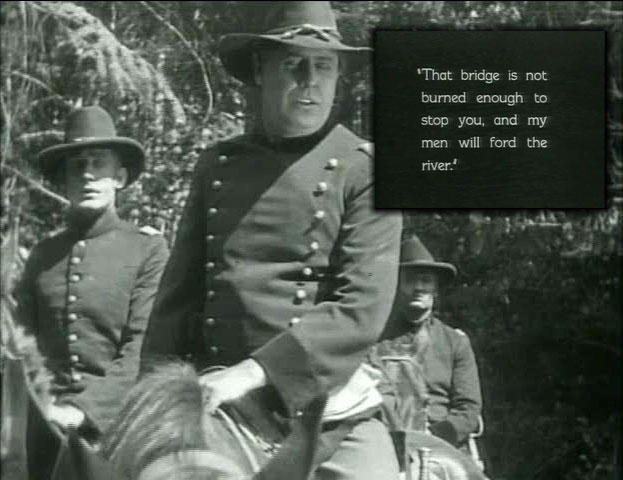 Hey, isn’t that Al St. John next to the bone-head commander who thinks the Rock River bridge is strong enough to hold his train? Bruce and Steve were talking about this after the show, pretty certain it’s Al, and so I grabbed this frame from the DVD. Al’s not in the shot of the commander that follows the train’s plunge into the river, though.

We had a great season opener, with quite a few kids in the audience. I think if the weather prediction for snow hadn’t been a factor (since it turned out to be a light drizzle) we’d have had a bigger crowd. Still The General went over well, as did Mooching Through Georgia – which was released in August 1939, four months before Gone With the Wind. Mooching actually played really well, further convincing us that a lot of Keaton’s talkie shorts do play well with an audience. We’ve run a couple of the Educationals in the past, and they’ve done well. When we ran One-Run Elmer, which has almost no dialogue, I played to it…and it was really effective.

As usual, the score for The General went really well for the audience, and somewhat unsatisfactorily for yours truly. Playing for this picture is a bit of a paradox for me, as it’s one of my favorite silents to present to audience and also one with which I feel I never “click” when I accompany it. Again, I’m the only one who notices, and I’m sure when I figure it out it’ll all make sense. Took me a number of shows of The Gold Rush before I felt right about it…before it got taken off the menu.

No performances in the past week, but I spent a bit of time arranging my orchestral score for Cops for high school band. The high schools in Milford CT and Hot Springs SD, who performed my band score for Chaplin’s The Immigrant last year, want another one. I’ve changed keys in a couple places to make things a little easier for the school kids, and got some suggestions from the conductors of the bands and the conductor of the TVYS in Boise as well about making the score more playable for high school musicians with limited rehearsal time.

Also, over the past week, I booked several shows, including the infamous Cinefest in Syracuse that so many of my colleagues who attend have told me about, and attended the always-entertaining Downtown Clown Review.

Up next is my monthly show at the Cinema Arts Centre in Huntington, a program of Chaplin Mutual shorts. It’s the same program as the one Bruce and I did at the Burns Film Center, using my 16mm prints. Dylan would prefer to do the show in 35mm, and rightly so, but the Mutuals in 35mm have been elusive or unaffordable and since the CAC is showing Monsieur Verdoux later in the week, we thought we’d slot a Chaplin shorts show in this month. Most of the rest of our shows for the rest of the year are now set; next month is Dreyer’s Passion of Joan of Arc.