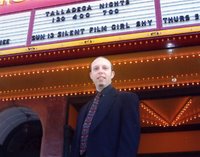 HAMILTON, NY – August 13 – Played for Harold Lloyd’s GIRL SHY on at the historic Hamilton Theater (near Colgate). Print was a beautiful 35mm from Sony, the edition restored by the UCLA Film & TV archive. Accompanied the film on the Mighty Miditzer virtual theatre organ. Sound was awesone. For all 3 August shows, I brought my keyboard stand (the “W” type from Quik-Lok) and midi pedals plus laptop and hoped to use keyboard owned by each theater. At the Hamilton, this worked, was a Yamaha PSR-DGxx 76-key model. Found the manual online and programmed a split that worked like my own DGX-320.

This is a great theater, and it’s really well run. Chuck Fox is an upbeat, organized and driven guy, and manages to hold community-draw events as well as the regular first-run fare. Theater is owned by Colgate. The Hamilton’s projectionist Henry not only knew what full aperture silent was, but scrounged around the theater and found the right lenses and plates. This was my 4th show there – I play there every year in August – and we had a nearly full house. A lot of repeats and a lot of people who’d heard about last year’s show of SAFETY LAST. Even had some local car collectors park their vintage ’20s autos in front of the theater. Must upload photo of newly restored marquee for ya sometime…

WAITSFIELD, VT – August 18 – accompanied the Lon Chaney PHANTOM OF THE OPERA at the Bundy Center for the Performing Arts. Used the Bundy’s phenomenal grand piano, projected in 16mm by my wife and daughter. Used a pair of Elmo 16-CL’s, which are fitted with 2-blade shutters for nice bright image. Second year at this venue, operated by Piero and Andrea Bonamico. They are an enthusiastic and entrepreneurial couple, who are also performers themselves. A straight shot up VT’s Route 100 alongside the eastern border of the national forest, a beautiful drive. A great show, and really appreciative audience. Met yet another person whose relative played piano during the silent era. Wasn’t able to get the Kurz 2500 programmed right for Mtz, was in over my head on this one. Piano worked out great, though, as their instrument is fantastic, both tuning and regulation.

MANCHESTER CTR, VT – August 20 – accompanied Keaton’s THE GENERAL at the Village Picture Shows theater. Third year there, and we had a great crowd, around 80 people, an increase from last year. Again, projected by my better two-thirds on the bright CL’s. Had re-created and re-shot the film’s main and end titles myself. Created titles in photoshop, printed onto transparency film, placed on home-made lightbox and shot with a Canon Scoopic donated to Silent Cinema Pres., Inc. (my non-profit). Looked like they were from the original, wood-grain and all. Theater owner Shelly Gibson and her husband and their staff are a treat to work with/for; one of the few cinemas in VT that shows both first-run and indie films. Accompanied film on a borrowed Yamaha Clavinova. Probably one of the more uncomfortable “weighted-keys” digital piano actions I’ve used; felt like I was kneading dough. Had hoped to be able to use Miditzer with this, but this particular model does not allow keyboard split required for my Mtz setup. Still, the piano sound was great, quite authentic, and the audience really loved Buster and the film.