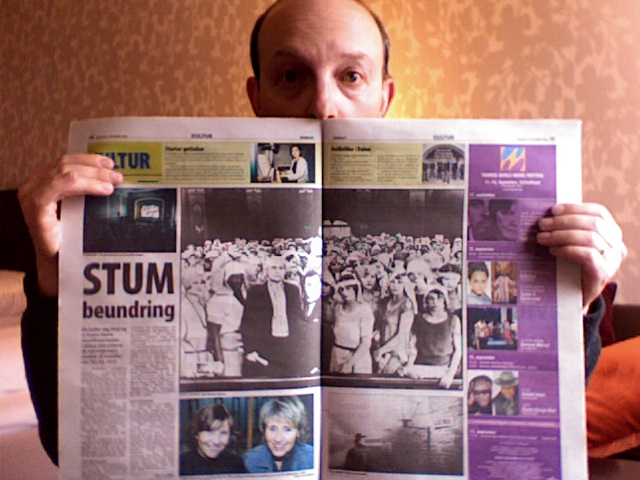 Sept 5 ’08 – Tromsø, NORWAY — Photo above is of me holding yesterday’s “Nordlys” daily paper, showing the big spread given to “Stumfilm Dagere”. Notice the photo of Buster Keaton in Seven Chances, which I’ll be accompanying on Sunday with the Miditzer. The kino (Norwegian for cinema, or movie theater, pronounced “CHEE-noh”) has a new piano, a nice Steinway grand, and it plays and sounds great.

Arrived Weds afternoon and after checking in, met Martha Otte (festival director) at a senior residence to do a showing of The Cook, which went well. A Young Chang upright with an incredibly bright sound, but it was fine. After dinner with Martha, her husband Hermann, and UK “stumfilmpianist” Neil Brand it was off to bed…

Thursday morning, bright and early I was up to play for two school shows, both of 5th graders, at the Verdensteatret. One of the percs (no pun intended, buit it’s there…) of playing outside the U.S. is that I don’t need to bring my own coffee. This year we showed A Reckless Romeo to the students; we’ve used The Cook for the last two years and I wanted to try this one for a change…plus it’s the other missing Arbuckle short that turned up here. This year we handed out pieces of film to all the students and explained briefly what film is and how there are still images projected rapidly that our brains turn into moving pictures. Since the students have only just started to learn English, Martha translated for me and, because we do a few of these every year, Martha does more of the talking since she knows what I’m going to say anyway. We also had mne do the thing where I play a couple of short moods on piano and have the kids guess what kind of scene it would go with. The kids really liked the film and had a lot of great questions. We will probably go back to The Cook for next year, as it’s more slapsticky and easier to understand.

Last night was opening night, and Neil Brand performed…an amazing job and a great score. Afterward there was a reception at the cinema’s cafe/bar.

Looking forward to tonight’s programs of Korkarlen (pron. shor-KAR-len, or “The Phantom Carriage”) score by Matti Bye and ensemble, and then Hitchcock’s The Lodger with Neil Brand on piano. I played for this many times while at NYU and haven’t seen or played for it since, but remember it being a great silent Hitchcock.

I don’t play again until tomorrow – I have two shows Sat and two on Sunday – and am being taken on a sightseeing excursion up a big mountain and will post photos if I can. I am able to do most online things but seem to have difficulty occasionally when uploading photos to the blog site and esp to Facebook.